Frederick Kozak, President of Appia said "The remaining assay results are better than the channel sample results previously released and confirm rare earths potential in the Western Anomaly area. This is a very promising new discovery area and will be the focus of future exploration. High grades found at Diablo and Sweet Chili Heat point to the potential of these two areas with much more exploration drilling to be done. On completion of drilling in the highly prospective WRCB-Magnet Ridge area, Appia will commence drilling on other prospective areas, including the Western Anomaly targets." 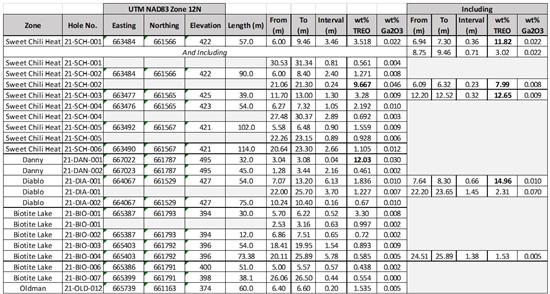 To view an enhanced version of this Table, please visit:
https://orders.newsfilecorp.com/files/5416/130126_table2.jpg

As previously announced, Appia commenced drilling in March, 2022 and to date has drilled just over 14,000 metres at WRCB, Magnet Ridge, Magnet Ridge West, Strocen and the Western Limb. Appia plans to drill up to 20,000 metres in the 2022 field season.

In the now-completed first phase of drilling at Magnet Ridge (previously known as Augier), a total of 34 holes have been drilled for a total of 5,253 metres. The initial view of the Magnet Ridge zone has been previously described and it outcrops on surface. It is approximately 300 metres in strike length, approximately 175 metres wide and has been penetrated over 100 metres down dip. The zone has similar visual characteristics to the recently discovered AMP zone at WRCB, but assay results will provide a better view of the properties of Magnet Ridge in the near future. A few assay results have been received for a portion of the first hole, but Appia is waiting on the complete results to analyze and interpret this new discovery. 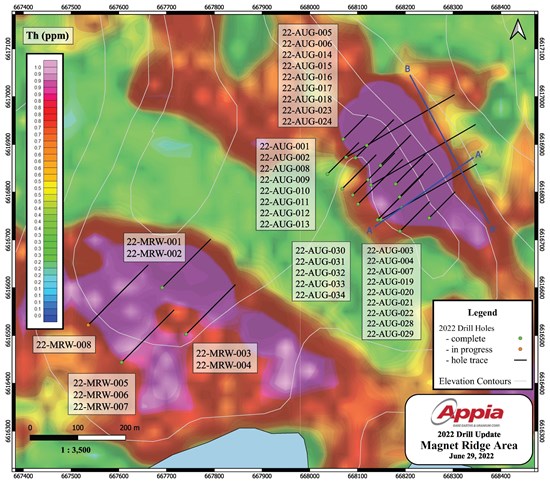 Appia has now drilled a total of 10 holes into Magnet Ridge West (MRW) and is seeing similar levels of anomalous radioactivity compared to Magnet Ridge. This also appears to be comparable to the AMP zone at WRCB, although no assay results have as yet been received for MRW. Drilled width at MRW has been up to 49 metres, similar to Magnet Ridge. In some of the holes, there has been more than one section of anomalous radioactivity, separated by intervals of non-radioactive rock. Up to 12 holes are planned for MRW.

Drilling at Strocen (STR in Figure 2 below) was inconclusive with 587 metres drilled in five holes on that prospect. Recent 2022 field exploration on the Western Limb, southwest of WRCB (WEL shown in Figure 2 below), yielded two surface readings of anomalous radioactivity of 10,000 CPS and 41,000 CPS. To date two holes have been completed at the Western Limb and a third is currently being drilled. Up to eight holes may be drilled in this area. 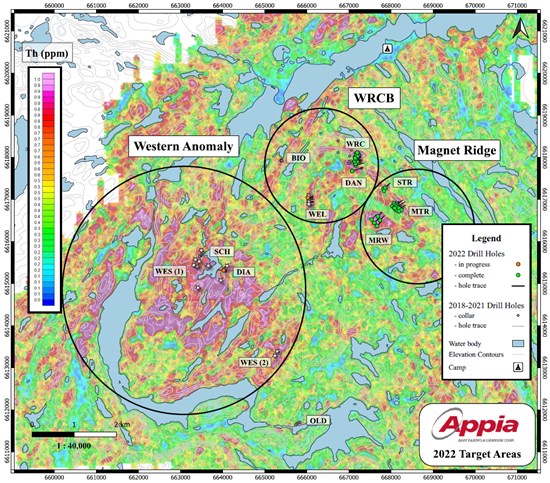 As previously disclosed, Appia is working towards a maiden resource estimate for the area. Industry delays through 2021 continue into 2022 for receipt of assay results. Appia has engaged the services of a second assay lab to process the increased volume of samples being generated by the 2022 drilling program. It is expected that the maiden resources estimate will initially be for the WRCB and Magnet Ridge areas. Timing of the report has yet to be determined but is likely closer to the end of 2022, depending on industry activity.

Appia recommenced drilling at Alces Lake in mid-March 2022 and plans to drill significantly deeper holes compared to the 100 holes (approximately 8,076 metres) drilled in 2021. This is designed to allow Appia to determine continuity at depth and along the identified REE mineralization trends as the company works towards a maiden resource estimate to be prepared in accordance with NI 43-101 for the area. With high-grade REE mineralization now identified in many locations within an area covering approximately 27 km2 of the Alces Lake block, the Company believes the project has the potential to be a world-class source of high-grade critical rare earth bearing monazite.

To view the source version of this press release, please visit https://www.newsfilecorp.com/release/130126