Vancouver, British Columbia--(Newsfile Corp. - June 22, 2022) - Tower Resources Ltd. (TSXV: TWR) ("Tower" or the "Company") is pleased to report that it has received gold assays for the first two of the six follow-up holes drilled in April on the recently discovered Lightning Zone on the Company's Rabbit North property near Kamloops, British Columbia, between New Gold's New Afton underground Cu-Au mine and Teck's Highland Valley open pit Cu-Mo mine (see Fig. 1).

The two new holes, RN22-028 and 029, were drilled on a section 50 m northeast of Discovery Hole 026 (see Fig. 2) which intersected 1.40 g/t Au over 95 m, including 4.21 g/t Au over 19.2 m (see Tower's January 11, 2022 press release). They were drilled toward one another in scissors fashion, at right angles to the inferred northeasterly (040°) strike of the shear-hosted Lightning Zone, with the objective of determining its dip. Hole 028 was drilled to the southeast (130°) while Hole 029 was drilled to the northwest (310°). Both holes passed completely through the zone, thereby establishing not only its dip, which is essentially vertical (see Fig. 3), but also its true thickness which is a remarkable 40 metres.

Hole 028 was drilled very steeply at -80° and thus cut the gold zone obliquely, increasing the length of the mineralized interval. It averaged 1.55 g/t Au over 138.0 m, including 4.76 g/t Au over 24.5 m, with both grades being a little higher than those of the comparable intervals in the discovery hole. The gold grade is remarkably uniform with only one high assay (43.6 g/t) over 1 ounce per ton (34.37 g/t) from 119 consecutive samples across the zone. The hole exited the southeast side of the gold zone at a vertical depth of 174 m, demonstrating that the zone continues uninterrupted to depth.

Stu Averill, a seasoned geologist and Director of the Company, commented: "It's unusual to hit such extensive mineralization with the first drill holes in a shear-hosted deposit but what really stands out is the consistency of the gold grade. We angled the holes through the zone in completely different directions yet got essentially the same results, even in the higher-grade subzone."

Joe Dhami, Tower's President, added: "Our gold discovery has many positive features but the most important is its location between two active mines in the great Kamloops Mining District. There is probably no other area in B.C. with better access, more mining infrastructure and lower development costs."

Hole 026, the discovery hole, was drilled obliquely to the northeast-striking gold zone (see Fig. 2) rather than squarely across the zone like Holes 028 and 029. While drilled months before these holes, it was of sufficient length that it passed between them.

Most of the volcaniclastic rocks in the ten holes that have now been drilled near the Lightning Zone are significantly anomalous in gold, assaying at least 50 to 100 ppb. The Lightning Zone itself is enveloped by 10 to 15 m of low-grade mineralization averaging about 0.3 to 0.5 g/t Au. As the cut-off grade in open pit gold mines is typically 0.3 g/t, this low-grade envelope may in future be considered part of the zone.

Hole 029 reached a depth of 374 m and thus extended far beyond the Lightning Zone, crossing the corridor to the northwest where Hole 027, which was drilled in late 2021 from the same pad as Discovery Hole 026, intersected two lower-grade "footwall" zones (since the Lightning Zone is now known to be subvertical, it does not have a definite footwall and the outlying gold zones to the northwest are now referred to as satellite zones).

Hole 029 intersected eight gold zones within the satellite corridor. These zones vary in down-hole width from 4 to 33 m and together aggregate 101 m, representing 52% of the 193-m-wide corridor. Five have low Au grades between 0.34 and 0.52 g/t and the other three have higher grades between 0.83 and 1.13 g/t. While presently of limited interest, most of these zones would probably be treated as ore rather than waste if the Lightning Zone were developed as an open pit mine.

The Au assays from the four remaining holes are being received in several batches and will require a thorough review prior to their release. Two separate releases may be required. 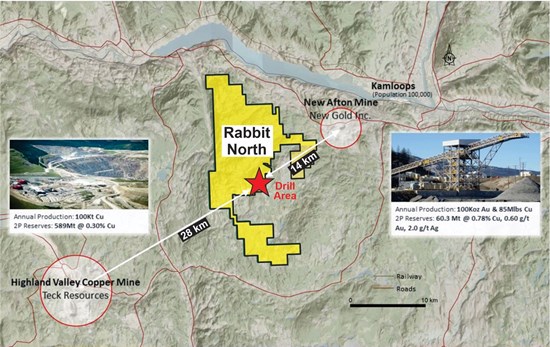 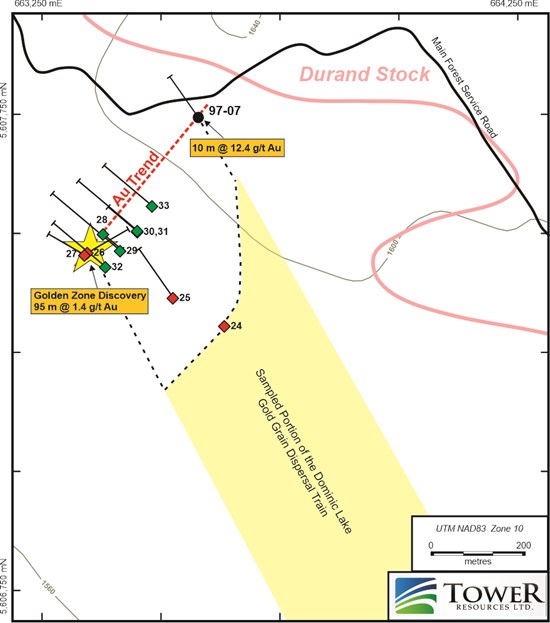 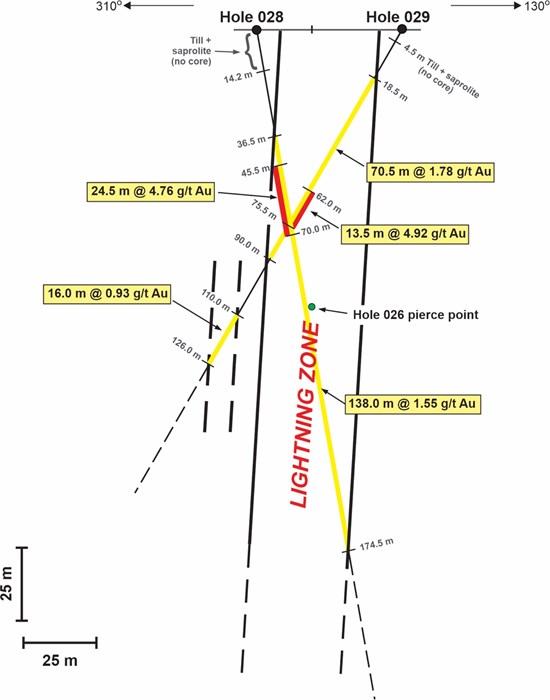 To view the source version of this press release, please visit https://www.newsfilecorp.com/release/128546