Frederick Kozak, President of Appia said: "The Augier discovery is a significant rare earth-bearing zone within what appears to be a continuous km-scale geological structure. It is massive - the radiometric anomaly is 300 metres in strike length and 175 metres wide. The mineralized interval is up to 70 metres in drilled width and has been intersected over 100 metres down dip. So far, the zone is open to the NNW, SSE and down-dip, it has no boundaries and it outcrops at surface. We eagerly await the assay results to determine just how big a REE discovery we have made."

As previously reported, the Augier discovery was prospected in 2018 and was channel sampled in 2021. The 2021 assay results returned 7 metres of 0.57wt% TREO with intervals of 1.35 wt% TREO (0.59 metres) and 1.57 wt% TREO (0.40 metres). The discovery is located approximately 1,500 metres directly southeast of the WRCB area, along a well-defined kilometres-scale structural corridor. 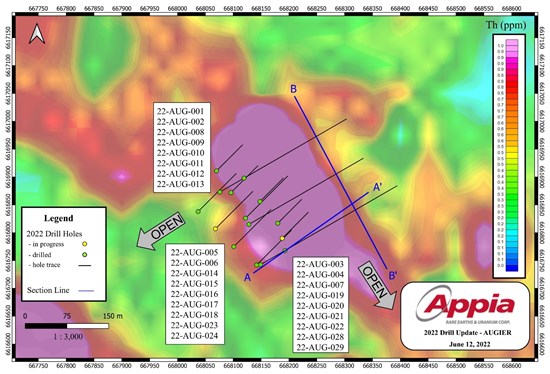 An extensive drilling program is underway with two drills working on the prospect. To date, a total of 4,040 metres in 24 holes have been drilled at Augier with two holes per setup. In addition, a large (100 kg) surface sample was taken from the immediate vicinity of the first two Augier holes. A total of 87 samples from the first hole at 22-AUG-001 have been sent for assay as well as the Augier large surface sample with assay results expected within 2 months.

The map in Figure 1 above shows that the zone of interest is open in both strike directions (north-northwest and south-southeast) as well as in the dip direction to the west-southwest. Figure 2 and Figure 3 (shown below) provide longitudinal and cross-sections through the prospect. 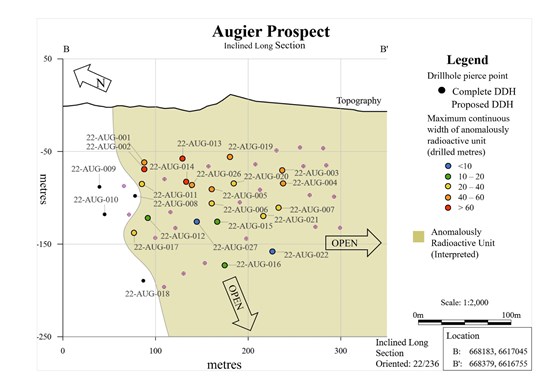 Note in Figure 2 at surface the length of the prospective zone shown in the inclined longitudinal section is approximately 300 metres. So far, there are no limits to strike extent. The zone remains open at depth after drilling to over 100 metres down dip. 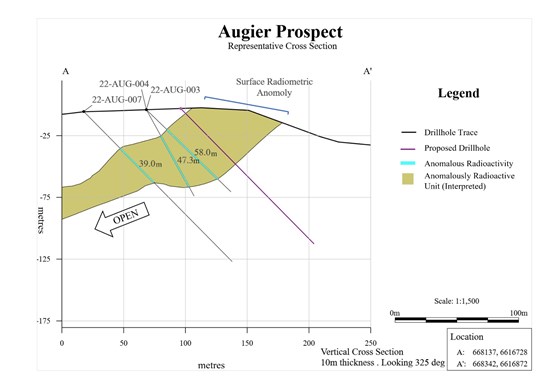 As shown above in Figure 3, the cross-section of the zone of interest has been intersected over 100 metres down dip from surface with no boundary found down dip

This discovery had not been drilled until 2022. The very first hole drilled into the discovery in 2022 intersected an encouraging 51.2 metres of anomalous radioactivity beginning at surface, with similar results from holes in the ongoing drilling program (see Table 1). The drilled width of this near-surface anomaly is unprecedented when compared to previous drilling campaigns at Alces Lake. Core has been sampled and submitted for assay from the first hole. Drilling details to date are summarized below in Table 1.

The Augier anomalous radioactive zone has similar mineralization to the AMP zone at WRCB. Visually, the zone is consistent through all of the Augier holes. Early assay results from 22-AUG-001 will be compared with the WRCB assay results in hand to further assess the zone potential .in this Augier discovery.

While the anomalous radioactive zone at Augier is at surface and the AMP zone at WRCB is plunging, Appia has not yet determined a conclusive link between the two zones. Also, there is substantial drilling to be done in the approximate 1,500 metre distance between WRCB and Augier to determine further potential continuity of the AMP zone and the thick anomalous radioactive zone at Augier.

Continued Delineation of the WRCB Discovery

Appia continues to delineate the magnitude of the rare earth elements discovery at WRCB with longer and deeper holes to build on the 2021 information collected. The results so far are encouraging. Initial 2022 drilling on WRCB has been completed and the drill has been moved to drill on the Augier discovery.

A very promising intercept was found in 22-WRC-024, which drilled into the Wilson zone. The core returned with 9 metres of significant mineralization from 38 metres to 47 metres, with a scintillometer reading up to 16,000 CPS. This is comparable to some of the other very high grade zones in WRCB at shallow depth, with TREO content to be determined in future assay results.

Additional 2022 exploration activities at WRCB will include an IP survey over the center of the WRCB discovery area to evaluate the method's applicability across the property. 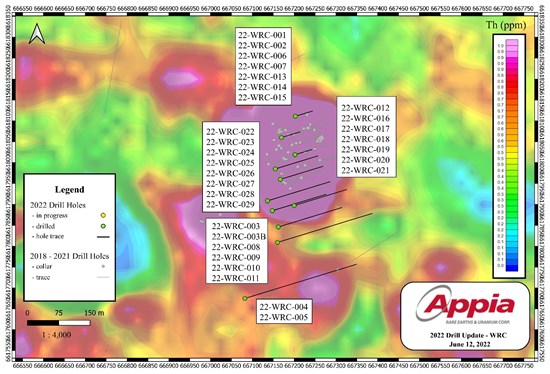 Appia commenced drilling at Alces Lake in mid-March 2022 and plans to drill significantly deeper holes compared to the 100 holes (approximately 8,076 metres) drilled in 2021. This is designed to allow Appia to determine continuity at depth and along the identified REE mineralization trends as the company works towards a maiden resource estimate in accordance with NI 43-101 for the area. With high-grade REE mineralization now identified in many locations within an area covering approximately 27 km2 of the Alces Lake block. the Company believes the project has the potential to be a world-class source of high-grade critical rare earth bearing monazite.

To view the source version of this press release, please visit https://www.newsfilecorp.com/release/127548