Alan Carter, Cabral's President and CEO commented, "These latest very high-grade drill results from Central lend further support to recent evidence from drilling that a high-grade corridor of mineralization exists within the core of the primary basement Central gold deposit. This high-grade zone has now been traced along strike for at least 100m and remains open to the northwest and southeast. Furthermore, it has been encountered in one of the deepest historic holes on the project, at 350m below surface. The high-grade zone is open down-dip on all of the sections in the corridor. We look forward to the results of the ongoing drill program at Central, as well as further results from the four other drill rigs which are currently active at the nearby MG, Machichie, PDM and Indio targets."

The Central gold deposit is located 5km northwest of the MG gold deposit and 2.5km southeast of the PDM target within the Cuiú Cuiú gold district (Figure 1). 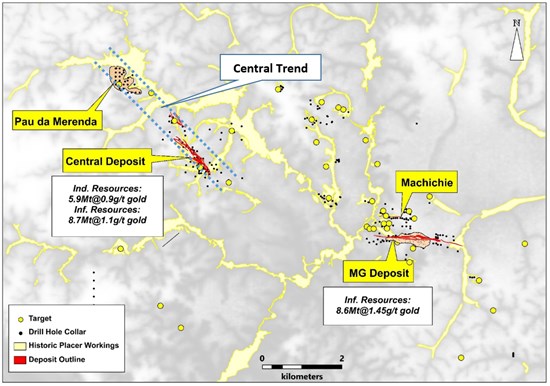 Figure 1: Map showing the location of the Central gold and MG gold deposits, the PDM (Pau de Merenda) and Machichie targets, and other key targets (yellow circles) within the central portion of the Cuiú Cuiú district

Diamond drilling at Central has been designed to: 1) better establish continuity and define high-grade, highly altered, brecciated and sheared zones within the primary basement deposit, 2) explore for additional high-grade mineralization in parts of the current resource with a low historic drill density, and 3) improve definition of the near-surface gold-in-oxide mineralization, a portion of the deposit that was historically largely undrilled. The near-surface oxide mineralization could be very important should heap-leach processing prove viable.

Assay results are reported herein from three diamond-drill holes recently completed on two adjacent sections located in the southern portion of the Central deposit (Figures 2, 3, and 4). DDH268 and DDH281 were completed on section N20870. DDH267 was drilled on the next section to the southeast, N20845. 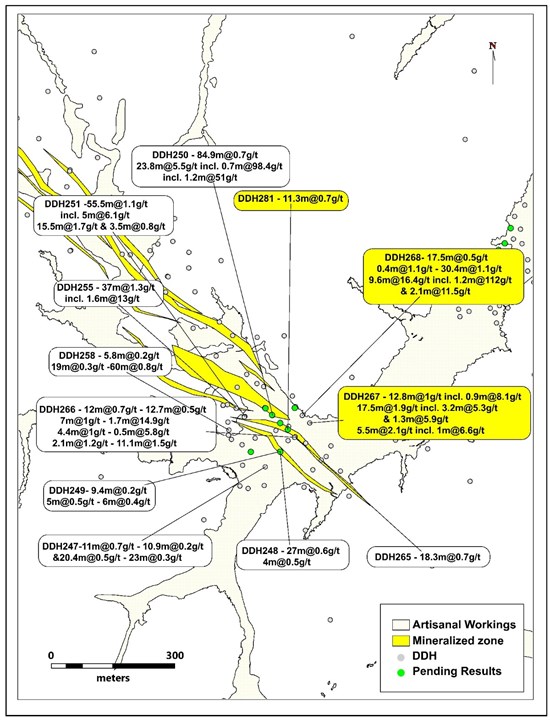 DDH281 was drilled on section N20870. It was designed to test define the northeastern limit of the mineralized zone at Central near surface. It did not encounter primary mineralization, but did return 11.3m @ 0.7 g/t gold from surface in the unconformably overlying gold-in-oxide blanket, which remains open to the northeast of DDH268 (Figures 2 and 3 and Table 1).

The mineralized zone on section N20870 remains open at depth. 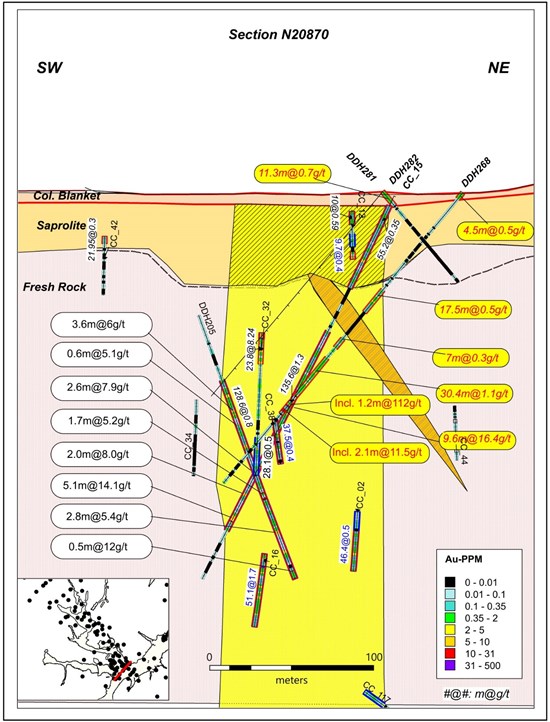 Only one historic hole, CC_04 had been drilled across this section. It intersected mineralization at a vertical depth of 185m. The newer mineralized intercepts demonstrate the continuity of the mineralized zone intersected in CC_04.

Historic hole CC_16, was drilled orthogonal to this section, and thus far is the deepest intersection on the section, at a vertical depth of 290m.

The mineralized zone remains open at depth on section N20845. 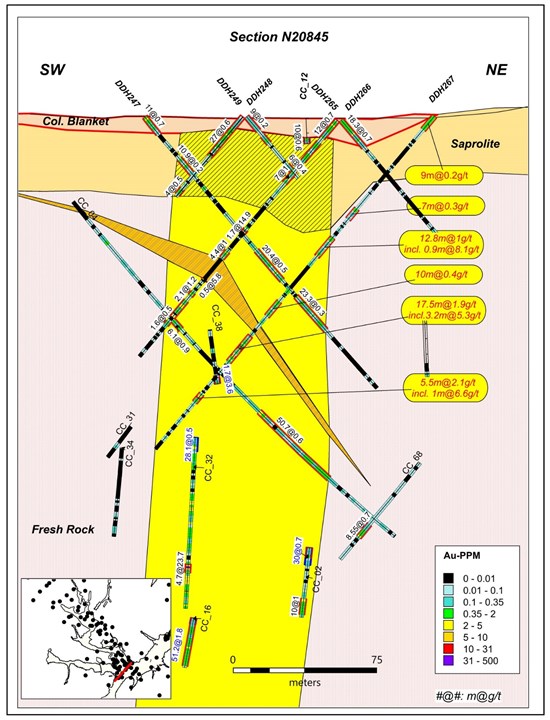 Establishing a High-Grade Corridor in the Southern Central Gold Deposit

Drilling continues to support the broad, extensive mineralized zone that defines most of the Central deposit. However, within that lower-grade larger deposit, high-grade mineralization has now been encountered on sections N20920, N20870, N20845, and N20825. The location of this high-grade mineralization further supports the company's thesis that there is a steeply dipping, northwest-trending high-grade corridor in this southern portion of the Central deposit. It occurs along the southwestern margin of the deposit, and encompasses a number of parallel high-grade structures. To date, the northwest-trending corridor has now been traced more than 100m along strike. It appears to be over 25m wide and extends to over 350m deep.

Most of the earlier historic holes on these two northeast-trending sectional planes (N20870 and N20845) were drilled either northwest to southeast, or southeast to northwest. We now know that this is on strike and parallel to the overall mineralized trend. On-strike data is very difficult to correlate. CC_16, 32, and 38 were all drilled within the corridor and pierced both sections (Figures 3 and 4). All three of the holes cut multiple high-grade intercepts in the corridor. However, only the portions of these holes that occur within the 25m windows of section N20870 and N20845 are shown on Figures 3 and 4. For example, CC_32 was drilled from northwest to southeast through the sections. It intersected four separate high-grade zones within the northwest-trending corridor.

Further drilling will be required to better define and expand the high-grade corridor. It remains open on strike and downdip.

Results are pending on four diamond-drill holes at MG and drilling is continuing.

Results are pending on six diamond-drill holes at Central and drilling is continuing.

Results are also pending on 36 RC holes drilled north of Central. These holes were designed to define the extent of near surface gold-in-oxide blanket material.

Results for three diamond-drill holes are pending at PDM. These are required for planning additional drill holes. Results are also pending on six RC holes at PDM. RC drilling has commenced to better define the gold-in-oxide blanket at PDM and drilling is ongoing.

Results are pending on the first three diamond-drill holes drilled in 2022 at the Indio target and drilling is continuing.

Results are pending on two follow-up diamond-drill holes at Machichie and drilling is continuing.

The Company is a junior resource company engaged in the identification, exploration and development of mineral properties, with a primary focus on gold properties located in Brazil. The Company has a 100% interest in the Cuiú Cuiú gold district located in the Tapajós Region, within the state of Pará in northern Brazil. Two gold deposits have so far been defined at Cuiú Cuiú and contain 43-101 compliant Indicated resources of 5.9Mt @ 0.90 g/t (200,000 oz) and Inferred resources of 19.5Mt @ 1.24 g/t (800,000 oz).

To view the source version of this press release, please visit https://www.newsfilecorp.com/release/122566