Endurance Doubles The Size of The Reliance Gold Property, B.C.

Vancouver, British Columbia--(Newsfile Corp. - May 2, 2022) - Endurance Gold Corporation (TSXV: EDG) (OTC Pink: ENDGF) (FSE: 3EG) (the "Company") is pleased to announce that it has acquired an option to earn a 100% ownership in the former Minto Gold Mine, Olympic and Kelvin gold prospects contained within a parcel of crown grants and mineral claims (the "Olympic Claims"). The Olympic Claims are located immediately adjoining and contiguous with the Company's previously owned Reliance Gold Property (the "Reliance Property") in southern British Columbia. The enlarged road-accessible Reliance Property, including the Olympic Claims, is located 4 kilometers ("km") east of the village of Gold Bridge, and 10 km north of the historic Bralorne-Pioneer Gold Mining Camp which has produced over 4 million ounces of gold.

Highlights of the transaction include:

The Olympic Claims are owned by Avino Silver & Gold Mines Ltd. ("Avino") and are located on the north and south shores of BC Hydro's Carpenter Lake Reservoir in the Bridge River Valley, east of the Royal Shear trend and the Company's current drilling focus. The year-round road-accessible acquisition increases the size of the Reliance Property to approximately 2,475 hectares, more than doubling the mineral rights controlled by the Company.

The Olympic Claims are underlain by "epizonal" orogenic-type gold targets that include the former producing Minto Mine that has produced 17,500 ounces of gold at an average grade of 6.3 grams per tonne ("gpt") gold prior to World War II. In addition, there are eleven historic government-documented mineral occurrences on the Olympic Claims which include the Minto North, Dauntless, Kelvin and Olympic gold prospects, many of which have also been explored with small underground workings prior to World War II. These prospects are associated with regional-scale structural deformation and/or iron carbonate alteration with analogies to the recent discoveries by the Company at the Eagle and Imperial zones, but on sub-parallel regional structures.

As examples of the gold potential of the Olympic Claims, in 2005 Avino reported 14.76 gpt gold over 9.0 metres ("m") (estimated true width of 4.5 m) from chip samples in trenching on the Minto North target. At the Olympic Target, 1988 drilling reportedly intersected 8.2 gpt gold over 3.48 m. As part of the Option, the Company intends to initiate an early-stage 2022 exploration program of systematic biogeochemical and soil sampling to help prioritize targets for future work.

Under the terms of the letter agreement with Avino, the Company can earn a 100% interest in the Olympic Claims for:

As part of the final requirement to earn its interest, the Company agreed to grant to Avino 750,000 share purchase warrants ("Warrants") by December 31, 2024 that offer Avino the option to purchase additional shares in the Company for a period of three years from the date of issuance. The exercise price of the Warrants will be set at a 25% premium to the 20-day VWAP share price at the issuance date. During the Option, if the Company is successful in defining a compliant mineral resource of at least 500,000 gold-equivalent ounces on the Olympic Claims then the Company will be obliged to pay Avino a $1,000,000 discovery bonus. 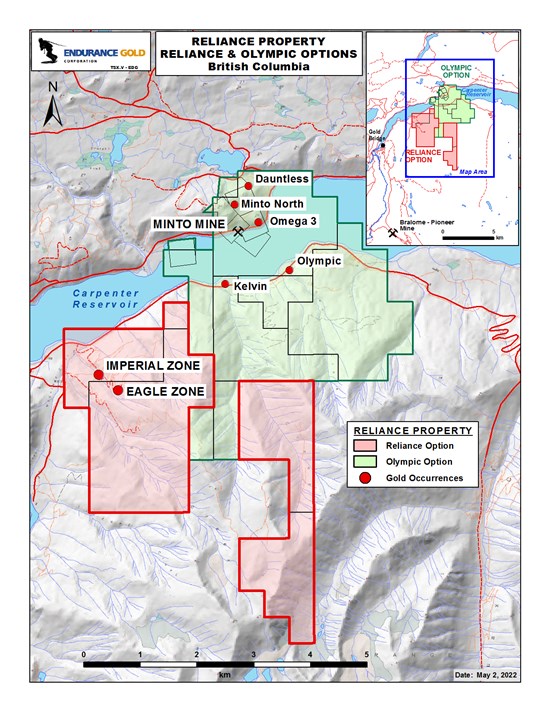 The Reliance Property B.C. - Location of Olympic Claims and the Original Reliance Option

To view the source version of this press release, please visit https://www.newsfilecorp.com/release/122351