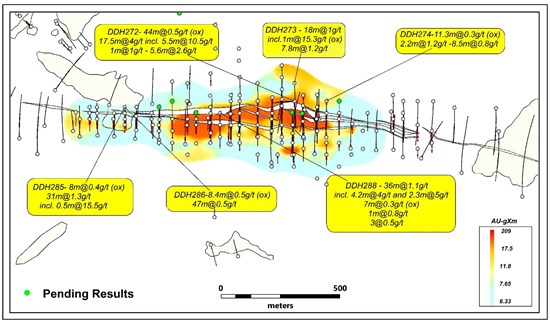 Figure 1: Map showing the outline of the primary MG gold deposit that was defined in the 2018 resource estimate (defined by E-W trending zones) and the interpreted grade x thickness contours of the overlying mineralized oxide blanket. The location of recently completed diamond-drill holes (DDH272, DDH273, DDH274, DDH285, DDH286, and DDH288) are also shown.

The new diamond-drill holes, DDH272 and DDH273, were both drilled on section E553660 (Figures 1 and 2, Table 1) and tested the high-grade main zone within the primary MG gold deposit. Both holes were drilled from the north to the south and were designed to intersect the primary mineralized zone above a deep intercept within the only historic hole drilled on this section. Historic hole, CC104, returned 20.6m @ 1.64 from 269.4m downhole (a vertical depth of 210m), including 2.0m @ 8.7 g/t (Figure 2). The new holes also tested downdip of shallower high-grade intercepts obtained saprolite basement intercept in in DDH209 which returned 21m @ 0.6 g/t gold from 42m downhole, within a 63m @ 0.5 g/t gold intercept extending from surface (Figure 2).

DDH272 and DDH273 also confirmed continuity of the main MG zone of mineralization in the basement between the saprolite basement intercept in DDH209 and the deep historic intercept in CC104 (Figure 2).

The bonanza intervals encountered in DDH272 appears to occur at the interpreted intersection of the main MG zone and a shallow-dipping structure extending downdip from DDH209, which returned 1.2m @ 2.6 g/t gold (Figure 2). A similar structure was intersected in DDH272, and returned 5.6m @ 2.6 g/t gold from 134.7m. It is also interpreted to be a shallow-dipping structure that intersects the main MG mineralized zone (Figure 2). 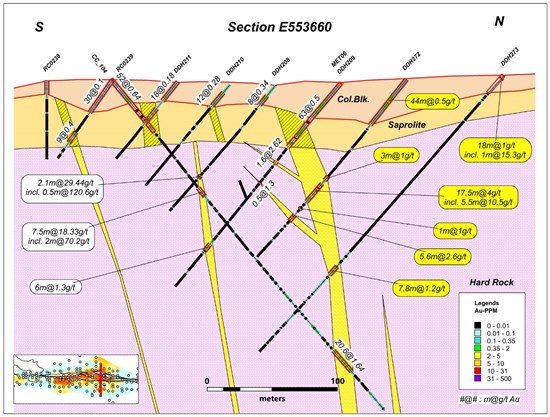 Figure 2: Cross section of line E553660 at MG through the primary MG gold deposit and the overlying gold-in-oxide blanket showing the location of DDH272 and DDH273 and previous drill holes on the section

Prior to the current program, no holes had been drilled on Section E552950 in the east central portion of the MG deposit (Figure 1 and Figure 3). All drilling on this section was designed to provide strike and vertical continuity through a nearly 100m gap in the drill database between sections E552903 and E552996. Result from RC holes 212, 213 and 214 on the section (Figure 3) were released previously (see press release dated November 24, 2021).

Both of the new diamond-drill holes, DDH 285 and 286, were drilled from the same platform (Figures 1 and 3) and were principally designed to test fresh basement mineralization. Each encountered multiple deep intercepts within the basement, as well as a thin veneer of transported oxide-blanket mineralization extending from surface.

The unconformable oxide blanket is fairly thin throughout the section, whilst broad zones of oxidized, soft, saprolite basement mineralization come nearly to surface along the north side of a hill, where intense weathering and oxidation extends to vertical depths of approximately 35m below surface.

Within the basement on Section E552950 the main MG mineralized zone is broader, and drilling confirmed multiple subzones can be traced to more than 130m below surface, while remaining open downdip (Figure 3, Table 1). 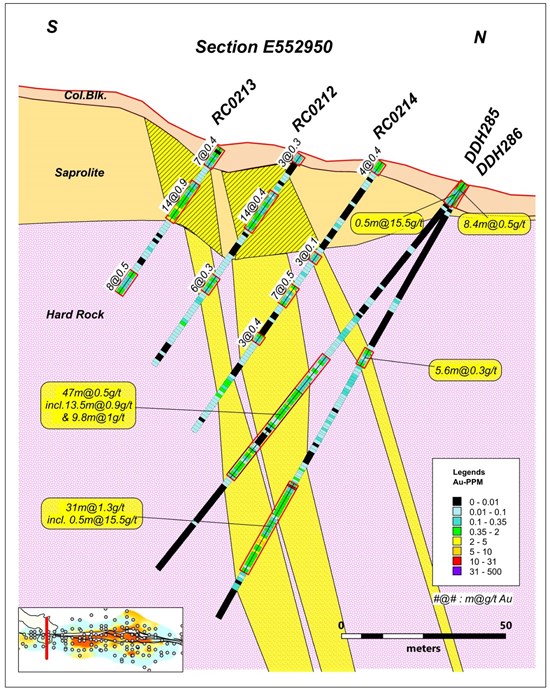 Figure 3: Cross section on line E552950 at MG through the primary MG gold deposit and the overlying gold-in-oxide blanket showing the location of DDH285, DDH286 and previous holes drill on the section.

Prior to the current program no holes had been drilled on Section E553350 on the western central side of the MG deposit (Figure 1). All drilling on the section was designed to provide strike and vertical continuity through an 85m gap in the drill database between Sections E553310 and E553395. Result from RC holes 210 and 211 (Figures 1 and 4) were released previously (see press release dated November 24, 2021).

As was the case in Section E552950 discussed above, the unconformable oxidized blanket mineralization on this section is fairly thin, forming the cap on the top and sides of a pronounced hill. Close to surface the basement mineralization is highly weathered and oxidized to saprolite which extends from near the top of the hill, to vertical depths of approximately 50m below surface (Figure 4).

Hole DDH288 also tested for the down-dip extension of basement saprolite encountered in RC0210, which returned 1.0 g/t gold over 19m. The zone appears to be narrower within the basement, running just 1.0m @ 0.8 g/t gold. A second deeper narrow intercept is interpreted to be a shallow-dipping structure extending from the north (Figure 4). It is also possible that both intercepts are shallow-dipping structures that extend down-dip towards the interpreted main zone.

Additional holes were already planned to test the downdip extension of interpreted MG main zone saprolite into basement for this section but have not yet been drilled due to sequencing. At this time no drilling to test the basement main zone has yet been done below the saprolite on this section (Figure 4). These holes should be completed in the next few weeks. 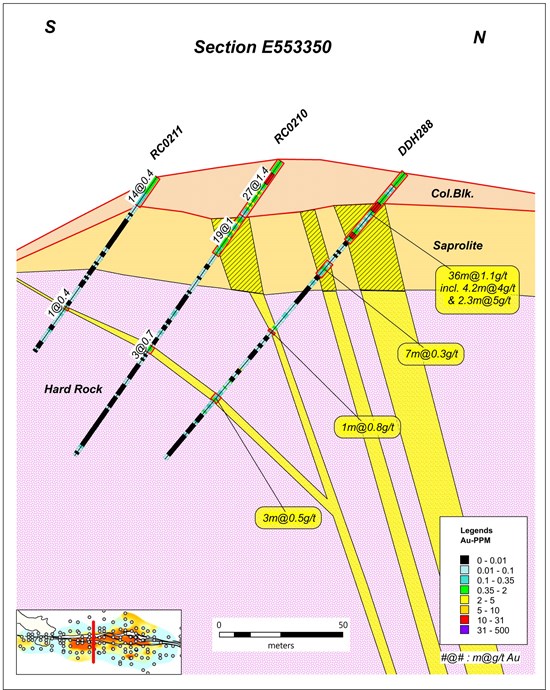 Figure 4: Cross section on line E553350 at MG through the primary MG gold deposit and the overlying gold-in-oxide blanket showing the location of DDH288 and all other previous holes drilled on this section

All the RC holes were designed to define the gold-in-oxide blanket, although RC161 did confirm the upper basement zone within CC70. RC161 was designed to test for blanket mineralization, but returned 25.0m @ 0.8 g/t from 57.0m to the base of the saprolite. This is probably the weathered up-dip extension of basement mineralization. It continued to cut assay values in the fresh basement, returning 16m @ 1.0 g/t gold below the base of the saprolite in fresh rock, starting at 82m downhole.

The change in surface topography approaching the western half of the MG deposit may provide additional benefit for the eventual exploitation of the MG mineralization. The hill has significant positive relief that should result in a reduced strip ratio for the initial exploitation of the upper oxidized saprolite main zone and overlying oxide blanket.

As discussed in earlier press releases, this oxidized saprolite and colluvial material should be largely free-digging with lower mining costs. Moreover, preliminary bottle-roll tests, from the company's ongoing heap-leach test work at KCA labs oxide material was very positive for both oxidized blanket material and basement saprolite mineralization (see press release dated February 24, 2022). Bottle-roll tests of six samples of various grades from saprolite and blanket oxide mineralized types returned 91 to 97% gold recoveries over 48 hours. The best recoveries (97%) were from a basement saprolite basement sample grading 2.3 g/t gold. Heap-leach column testing on a large representative composite sample is ongoing and results should be available in May. This will determine whether Cuiú Cuiú basement saprolite mineralization and oxide blanket are amenable to low-cost, low-capital, heap-leach processing.

Multiple-oriented vein structures contribute significantly to the mineral inventory at many deposits. One of the best examples is Eldorado Gold's world-class, intrusive-hosted Sigma and Lamaque mines and the nearby Triangle mine in Val D'Or, Quebec (Eldorado Gold press release dated September 5, 2019). Sigma and Lamaque combined to produce 9.5 million ounces of gold from 1935 to 2012. The bonanza grade intercepts at MG have now been traced continuously along strike for at least 235m. They remain open on strike and downdip (see press release dated March 10, 2022). Like Sigma and Lamaque, shallow-dipping structures may form an important control to bonanza grades, and may also provide additional gold resources.

Results are pending on four diamond-drill holes at MG and drilling is continuing.

Results are pending on seven diamond-drill holes at Central and drilling is continuing.

At the recently discovered mineralized zone in basement granitic rocks at the PDM target located 2.5km NW of Central (see press release dated January 12, 2022), diamond-drilling also has been temporarily suspended as assay results have become too backlogged. Results on twelve diamond-drill holes are currently pending, and need to be interpreted for additional drill hole planning.

Meanwhile, the diamond drill has been redeployed from PDM to Machichie, where an infill and step-out drilling program has just begun and trenching is still in progress.

Results are currently pending on the first two diamond-drill holes drilled in 2022 at the Indio target. Drilling is ongoing.

The Company is a junior resource company engaged in the identification, exploration and development of mineral properties, with a primary focus on gold properties located in Brazil. The Company has a 100% interest in the Cuiú Cuiú gold district located in the Tapajós Region, within the state of Pará in northern Brazil. Two gold deposits have so far been defined at Cuiú Cuiú and contain 43-101 compliant Indicated resources of 5.9Mt @ 0.90 g/t (200,000 oz) and Inferred resources of 19.5Mt @ 1.24 g/t (800,000 oz).

To view the source version of this press release, please visit https://www.newsfilecorp.com/release/121159