This news release constitutes a "designated news release" for the purposes of the Company's prospectus supplement dated February 2, 2021 to its amended and restated short form base shelf prospectus dated January 4, 2022.

Vancouver, British Columbia--(Newsfile Corp. - April 6, 2022) - HIVE Blockchain Technologies Ltd. (TSXV: HIVE) (Nasdaq: HIVE) (FSE: HBF) (the "Company" or "HIVE") is pleased to announce the production figures from the Company's global Bitcoin and Ethereum mining operations for the month of March 2022, with a BTC HODL balance of 2,568 Bitcoin and 16,196 Ethereum as of April 3, 2022. In addition to this the Company is pleased to announce two milestone accomplishments of reaching 2 Exahash of Bitcoin mining and 6 Terahash of Ethereum mining this month.

HIVE is pleased to announce its March 2022 production figures and mining capacity:

*The Company's production of ETH from GPU mining (including selective optimizations of GPU hashrate) has yielded a total ETH production of 2,549 ETH.

Frank Holmes, Executive Chairman of HIVE stated "We are very pleased to report HIVE has continued its extremely strong momentum in expanding our hashing power, notably our Ethereum mining hash power grew by 33% this month. In March we produced an average of 9.0 BTC per day, and we are pleased to note that as of today, we are producing approximately 9.0 BTC a day even after the recent difficulty increase of 4%. Our Bitcoin hashing power increased in March and at the calendar month-end our hashrate was 2.0 Exahash, which translated into a 6% increase in BTC mining on a month over month basis, while BTC prices corrected."

Aydin Kilic, President & COO of HIVE noted "We continue to strive for operational excellence, ensuring that as we scale our hashrate as a company we also optimize our uptime, to ensure ideal Bitcoin and Ethereum output figures." Mr. Kilic continued, "We also would like to provide an update on the BTC and ETH equivalency, where one can equate value of the coins produced daily. As such the ETH that HIVE produced during the month of March, equated daily, is approximately equal to a monthly total of 168.8 BTC, which we refer to as Bitcoin equivalent or BTC equivalent. This is in addition to the 278.6 BTC produced from our Bitcoin mining operations during March, for a total of 447.4 Bitcoin equivalent".

The Company's total Bitcoin equivalent production in March 2022 was: 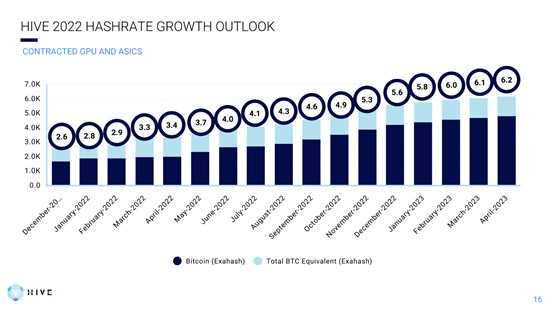 Ethereum HODL to Fund Intel New Chips to Mine BTC

Over the past year our Ethereum HODL position outperformed our Bitcoin HODL. ETH is much more volatile than BTC and once again we have used the volatility to generate capital to expand our operations. We have sold down our ETH holdings to fund our Intel strategic relationship and the building of our rigs. We are very thrilled about the Intel deal for several reasons and due to the greater volatility of ETH we have traded out approximately 10,000 ETH coins to fund the expansion in our BTC channel. Further we have expanded our daily ETH production to replace coins we have sold. Our long-term strategy is grow our BTC footprint while using our ETH to help with this ambition. Our ETH production is allowing us to generate the highest margins from proof of work in the business. We are not concerned about the 6 year narrative that ETH will become only proof of stake in the immediate future, as evidenced by the robust and secure proof of work consensus mechanism has helped ETH process more transactions in USD volume at $11.4 trillion US, where Visa has done $10.4 trillion US in 2021. Our strategy to mine both BTC and ETH has allowed HIVE to generate some of the highest returns on invested capital for our shareholders while expanding our revenue and coin production.

Recently Intel has published more specifics on introduction of the Intel Blockscale ASIC, a game changing event for BTC miners. Intel has only made this chip available to select customers, of which Hive Blockchain is one of four customers globally. The Intel Blockscale will advance energy efficient hashing for proof of work consensus using green energy. Further their US designed high performing chips are up to 26 J/TH power efficiency at a very competitive and attractive price that fits into our strategy to generate high returns on invested capital for our shareholders. Hive Blockchain shares in the sustainability goals that are important to both Intel and ESG focused investors.

HIVE is a growth-oriented technology stock in the emergent blockchain industry. As a company whose shares trade on a major stock exchange, we are building a bridge between the digital currency and blockchain sector and traditional capital markets. HIVE owns state-of-the-art, green energy-powered data centre facilities in Canada, Sweden, and Iceland, where we source only green energy to mine on the cloud and HODL both Ethereum and Bitcoin. Since the beginning of 2021, HIVE has held in secure storage the majority of its ETH and BTC coin mining rewards. Our shares provide investors with exposure to the operating margins of digital currency mining, as well as a portfolio of cryptocurrencies such as ETH and BTC. Because HIVE also owns hard assets such as data centers and advanced multi-use servers, we believe our shares offer investors an attractive way to gain exposure to the cryptocurrency space.

To view the source version of this press release, please visit https://www.newsfilecorp.com/release/119463