The 2022 Ducros Project Phase I diamond drilling program, which began in early February at the Fortin Sill target area with one diamond drill (February 22, 2022 News Release), is focused on drill testing multiple Ni-Cu-PGE targets generated by the Abitibi Geophysics ground electromagnetic (ARMIT-TDEM) survey completed in 2020. At the time of writing, a total of five holes have been completed for over 1,500 metres of core drilled, with one hole in progress.

Of note, drill holes QDG-22-04 and QDG-22-05, located approximately 260 metres apart, have intersected wide core length intervals of ultramafic rocks, some of which contain what is interpreted to be primary magmatic sulphides, the results of which are summarized below.

Drill holes QDG-22-01 through QDG-22-03 were designed to evaluate a series of near-surface high-conductance electromagnetic anomalies identified from the ground electromagnetic survey completed in late 2020 (ARMIT-TDEM). All three holes encountered thick successions of variably sheared, altered and quartz-carbonate-veined mafic volcanic rocks +/- minor feldspar porphyritic dykes intercalated with units of variably graphitic sulphide/oxide facies iron formation, some of which are several metres thick. The targeted electromagnetic conductors are interpreted to be adequately explained by the occurrence of the pyrrhotite + pyrite-rich sulphide facies iron formation units in these holes.

Drill hole QDG-22-04 was collared approximately 330 metres southwest of the Fortin Sill Ni-Cu-PGE showing, in an area of no previous drilling and was designed to evaluate the geology of the area at depth; the hole is also intended to be used as a platform for future down-the-hole electromagnetic surveys (BHEM). After collaring in a mixed package of sulphide/oxide facies iron formation, sheared mafic to intermediate and felsic volcanic rocks, hole QDG-22-04 intersects ultramafic rocks at a hole depth of approximately 193 metres, including what is interpreted to be coarse-grained pyroxenite and dunitic units (chlorite schists). Of note is the occurrence of what is interpreted to be primary magmatic sulphides (blebby pyrrhotite) within portions of strongly chlorite-altered ultramafic rocks, such as at 424 metres depth (Figure 1). The hole was terminated at 559.5 metres within a strongly sheared and quartz-carbonate veined ultramafic unit. 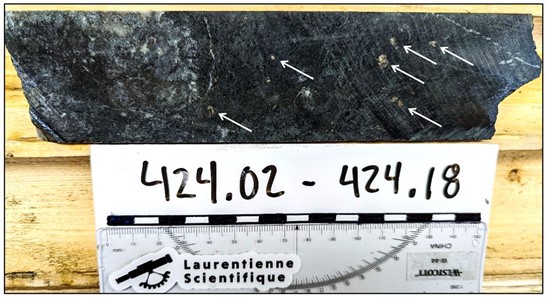 Figure 1. A photo of drill core from hole QDG-22-04 at ~424 metres depth shows what is interpreted to be primary magmatic sulphides (blebby pyrrhotite) within a strongly chloritized ultramafic rock (chlorite schist).

To view an enhanced version of Figure 1, please visit:
https://orders.newsfilecorp.com/files/8152/116722_quebecnickel.jpg

Drill hole QDG-22-05 was collared approximately 85 metres to the west-southwest of the Fortin Sill Ni-Cu-PGE showing and was designed to undercut by approximately 85 metres historical drill holes GCF-08-06 and GCF-08-07, drilled by Golden Valley Mines in 2008, which intersected 0.21% Ni + 0.11% Cu over 33 metres (not analyzed for PGE's) and 0.38 % Ni, 0.44% Cu and 0.65 g/t Pt+Pd+Au over a 20.70 metre core length (from 4.50 m to 25.20 m down-hole) respectively. From approximately 72 metres downhole depth to the end of the hole at 285 metres, hole QDG-22-05 cored through a mixed package of mafic volcanic rocks, minor sulphide/oxide iron formation and moderately to strongly sheared ultramafic rocks, all cut by late feldspar porphyritic dykes. This hole ended at 285 metres depth in strongly sheared and veined ultramafic rocks (Figure 2).

Figure 2. A photo of drill core from hole QDG-22-05 near the end of the hole at ~279 metres depth showing intensely sheared and veined ultramafic rocks.

A total of 991 samples from the first five holes completed at the Fortin Sill target area have been delivered to the AGAT Laboratories sample preparation facility in Val-d'Or. Assay results are expected to be received in the coming weeks and will be reported in due course.

In addition to the ongoing Phase I drilling program at the Fortin Sill Ni-Cu-PGE target, the Company also reports the 1,717 line-kilometre property-wide helicopter-borne Geotech Ltd. VTEMTM electromagnetic-magnetic survey is nearing completion. Once reviewed and interpreted, the results from this survey will be used to guide the Phase II drilling program, which will focus on testing new Ni-Cu-PGE related geophysical anomalies associated with unexplored mafic-ultramafic intrusions over the entire Ducros property holdings.

Gary DeSchutter, P.Geo., Vice-President of Exploration for Quebec Nickel Corp., and a Qualified Person ("QP") as defined under National Instrument 43-101 ("NI 43-101"), has reviewed and approved the scientific and technical content of this press release.

Quebec Nickel Corp. is a mineral exploration company focused on acquiring, exploring, and developing nickel projects in Quebec, Canada. The Company has 100% interest in the Ducros Group Property, consisting of 280 contiguous mining claims covering 15,147 hectares within the Abitibi region located in Quebec, Canada. Additional information on Quebec Nickel Corp. is available at www.quebecnickel.com.

The CSE has neither approved nor disapproved the contents of this news release. Neither the CSE nor its Market Regulator (as that term is defined in the policies of the CSE) accepts responsibility for the adequacy or accuracy of this release.

To view the source version of this press release, please visit https://www.newsfilecorp.com/release/116722

Sign up to receive news releases by email for Quebec Nickel Corp or all companies belonging to the Mining and Metals industry.