Toronto, Ontario--(Newsfile Corp. - February 7, 2022) - Satori Resources Inc. (TSXV: BUD) ("Satori" or the "Company") is pleased to announce that it has received its Exploration Permit for the 100% owned Tartan Lake Project, Flin Flon, Manitoba, which is valid for a three-year period and allows for 155,000 meters of drilling. The Company plans to resume drilling early in this first quarter with a 5,000 metre phase II drill program that will include a series of deep holes testing the extent of the recently announced high grade mineralization in hole TLMZ21-12, which intersected an average 47.56 g/t Au over 5.8 meters, within a wider interval averaging 23.76 g/t Au over 12.6 meters. This is the second highest value intercept ever recorded at Tartan Lake with over 500 holes completed to date, and was one of the top 5 high grade drill intercepts reported last year according to Streetwise Reports (12/28/21) (Counting Down Top Drill Holes of 2021 (streetwisereports.com). In addition to following up on the high grade intercept, the Company plans continue to expand the South Zone to depth, and to begin drill testing targets along the property's wide shear zone, outside of the current resource areas.

The high-grade mineralization intersected in hole TLMZ21-12 was found in the hanging wall of the Main Zone, and is associated with pyrite rich felsic volcanics, not the massive quartz-carbonate veins that typically denote high grade mineralization at both the Main and South Zones. The interval returned consistent gold grades throughout the entire interval (Ref. Table 1.0). This new mineralization is interpreted to be sub-vertical and is open in all directions. The association of the high grade intercept with a felsic volcanic unit, the absence of quartz-carbonate veining, the increased sulphide content, and the location in the hanging wall of the Main Zone, collectively, indicate that this may be a potential new zone of mineralization. This new zone lies to the west and is deeper than all the historical drilling tracing the Main Zone.

Jennifer Boyle, Satori's President and CEO, states that "We are looking forward to following up on the spectacular high grade results reported in TLMZ21-12. Our phase one drill program at the Main and South Zones delivered on every one of our stated objectives. We demonstrated continuity of the mineralized system at depth, down plunge, and we are thrilled that of the twelve holes drilled, two reported intersections which ranked as the second highest results ever at both the Main and South Zone deposits. We have a strong balance sheet going into 2022 and the phase 2 drilling in Q1 is intended to expand the high-grade Hanging Wall Zone intersected in TLMZ21-12." 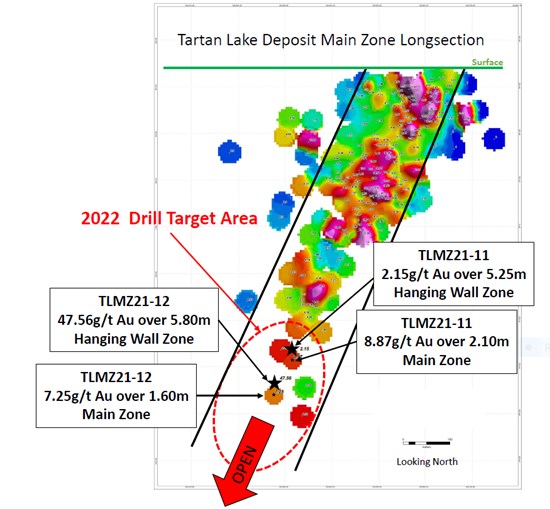 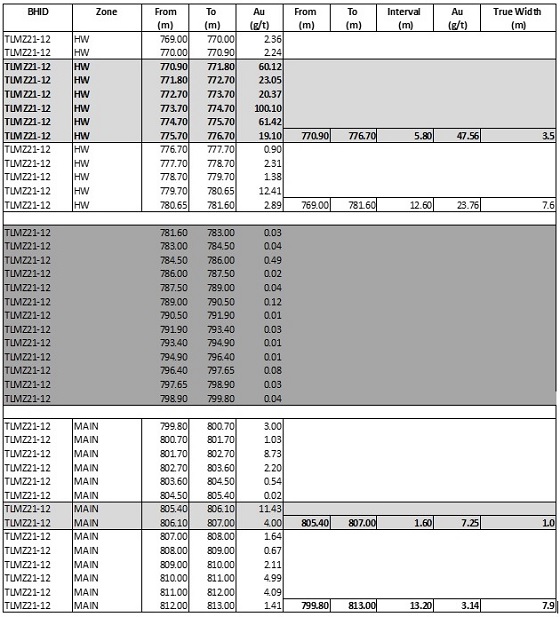 True width is estimated based on the currently available interpretation of the mineralization and drill hole orientation surveys.

To view the source version of this press release, please visit https://www.newsfilecorp.com/release/112993