Vancouver, British Columbia--(Newsfile Corp. - February 2, 2022) - Homerun Resources Inc. (TSXV: HMR.H) ("Homerun" or the "Company") is pleased to announce that the Company has completed a 1055-line-kilometre airborne magnetic survey on its Homathko Gold Project, and the expansion of the property by an additional 17,700 hectares. This property expansion connects the two, previously separate, blocks of the Homathko Project, which now cover a combined total of 30,970 hectares across the highly prospective and generally underexplored Homathko Icefield. 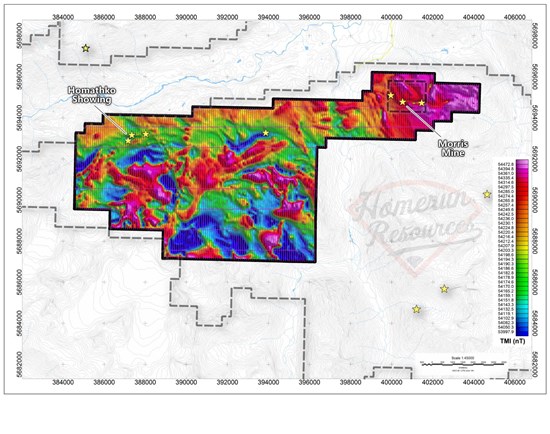 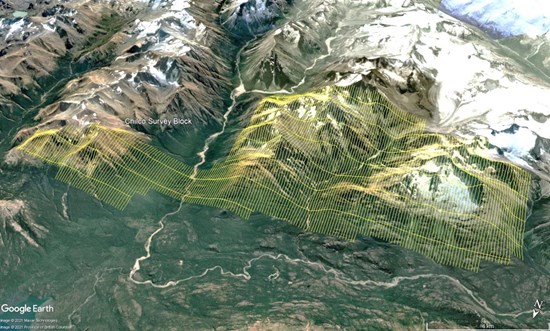 The airborne magnetic survey identified magnetic trends and potential structures associated with the primary Homathko showing and around Homathko Peak, as well as towards the east, near the historic Morris Mine.

Magnetic highs coincident with the primary Homathko showing form a curvilinear feature, locally extending east-west around the circumference of Homathko Peak into Homerun's newly expanded claim area, further to the west. These magnetic highs coincide with structural measurements and grab samples, including one sample yielding 57.9 g/t gold, taken during the Company's property visit in late 2020, as well as mapping done by previous operators.

Also of note are several roughly north-south trending magnetic highs parallel to those which strike through the Morris Mine area. These trends appear to continue further towards the south, roughly parallel to topographic features, which suggests a possible continuation towards historical MINFILE showings in the southern extension of the newly-expanded property area.

More maps and data will be made available at www.homerunres.com.

About the Homathko Gold Project

The Company has executed an option agreement ("Option Agreement") for the right to acquire a 100% interest in the Homathko Gold Project located in the Caribou Regional District of British Columbia (the "Property").

Mineralization on the property was first identified by Falconbridge Limited in 1966 which reported grab and trench sampling returning up to 384 g/t gold. Work completed by Transition Metals identified a larger, high-grade lode gold system traceable at surface along 1.5 kilometres of strike length and identified grab samples up to 87.5 g/t gold in 2010. According to Transition, the mineralization is hosted within quartz-carbonate veining developed within and near the margins of a shear bounded, altered quartz-feldspar porphyry sill. Based on field observations, geologists from Transition have interpreted that the environment for mineralization on the property appears consistent with that of a traditional mesothermal lode gold deposit which bears many similarities to similar deposits occurring elsewhere in the Stikine belt (Pioneer/Bralorne District, Elk Gold Mine etc.). To date, the Homathko Gold Project has never been drill tested. (1,2,3)

Qualified Person
Case Lewis, P.Geo., a qualified person as defined in National Instrument 43-101, has reviewed and approved the technical contents of this news release on behalf of the Company.

On behalf of the Board of Directors of
Homerun Resources Inc.

To view the source version of this press release, please visit https://www.newsfilecorp.com/release/112540

Sign up to receive news releases by email for Homerun Resources Inc. or all companies belonging to the Mining and Metals industry.