Vancouver, British Columbia--(Newsfile Corp. - January 6, 2022) -  Cabral Gold Inc. (TSXV: CBR) (OTC: CBGZF) ("Cabral" or the "Company") is pleased to provide a summary of successes achieved during 2021 at the Cuiú Cuiú gold district in northern Brazil, and outline its plans for 2022.

During 2021, Cabral's ongoing drill program was primarily focused on defining the high-grade zones within the MG and Central gold deposits, but the Company also identified two new near surface gold-in-oxide blankets at MG and PDM, as well as a new high-grade mineralized zone in hard rock at PDM. The Company continued to drill test and expand other new target areas, such as Machichie, Machichie SW, Morro da Lua, and Indio. There are still some 39 other gold targets to test on the 36,000 ha Cuiú Cuiú property. Concurrent with the drill program Cabral continued its regional grassroots reconnaissance exploration in new areas of the district including stream- and soil-geochemical sampling and prospecting.

Based on positive initial results realized during early 2021, Cabral accelerated its drilling campaign. The Company started 2021 with two RC rigs and added a diamond rig in February and two more diamond rigs in July following the successful closing of a financing in July. A total of 25,359m of drilling was completed during the year, including 16,027m of RC drilling and 9,332m of diamond drilling. Assay results from 21 diamond-drill holes and 12 RC holes completed at MG, PDM, and Central were still pending at year end and will be released in the coming weeks.

Cabral is looking forward to continuing its aggressive exploration program in 2022 and is planning an expanded drill program at PDM following encouraging drill results in December which included 22.4m @ 4.8 g/t gold from the granitic rocks below the recently identified gold-in-oxide blanket. In addition, diamond drilling at the Central and MG gold deposits will continue with the objective of defining higher grade zones within both deposits, while testing for additional zones of mineralization. RC drilling will also continue testing the overburden above the Central gold deposit with the objective of identifying a third gold-in-oxide blanket.

Elsewhere additional drilling and trenching is planned at Machichie, and several regional targets including Tracaja, Indio, Dona Moca and the new Escondido target. 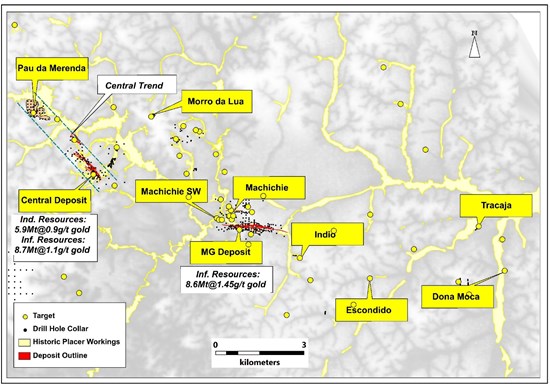 Figure 1: Topographic map showing the location of the MG and Central gold deposits (in red) and the outline of the recently discovered gold-in-oxide blankets at PDM and MG (in beige) as well as other key targets at Cuiú Cuiú. The outline of the historic placer gold workings are shown in pale yellow. MG and Central are the two deposits comprising the current project resource

Highlights of 2021 are as follows:

Initial RC and diamond drilling at MG resulted in a significant reinterpretation of the geology of the MG deposit. A thick, laterally extensive, flat-lying cover sequence of redeposited oxidized, heavily weathered and unconsolidated mineralized material (oxide blanket) was identified extending from surface to up to 60m depth, and represents a new discovery during 2021. This new style of gold deposit resulted from the erosion of the basement MG gold deposit, and unconformably overlies the primary gold deposit. It extends significantly to the north and south of the east-trending basement deposit. Importantly, this mineralized blanket material will likely be free digging and was largely considered sterile waste material in the compilation of the 2018 resource estimate.

Following the identification of the gold-in-oxide blanket mineralization at MG, the Company elected to explore for similar near surface oxide gold deposits elsewhere within the Cuiú Cuiú district. The next target was PDM, located 2.5km NW of the Central gold deposit and 6.5km NW of the MG gold deposit. Several scattered historic holes and trenches at PDM had returned significant gold values from bedrock as well as oxidized weathered rock.

Alan Carter, Cabral's President and CEO commented, "2021 was an extremely busy and pivotal year for Cabral and must surely be the most successful year in our Company's history. The new unconsolidated oxide and hard-rock gold discoveries that we made at MG and PDM during 2021 confirm that Cuiú Cuiú is a district and contains multiple gold deposits. I would like to again congratulate our team in Brazil on a very successful year. We look forward to another exciting year in 2022 that will focus on establishing the limits of these new mineralized zones and will also see us drill testing a number of other high-quality targets within the Cuiú Cuiú district during the coming months."

The discovery of the two near surface gold-in-oxide deposits at MG and PDM is a potential game changer for Cabral. The completion of the metallurgical test work at the Kappes Cassiday lab in Reno will be a high priority for the Company in early 2022. Should this work indicate that the mineralized material at MG is amenable to low-cost heap leaching, the Company plans to proceed with a scoping study later in 2022.

Diamond drilling will continue at the Central gold deposit. As at the MG gold deposit, the current program is designed to further define the high-grade zones at Central.

RC drilling at Central is also in progress with the objective of testing for the presence of gold-in-oxide blanket mineralization above the primary Central gold deposit similar to that identified at both MG and PDM in 2021. An initial 25-hole RC drill program is in progress.

Further diamond drilling is also planned at the PDM target following the recent discovery of a zone of high-grade primary gold mineralization which returned 22.4m @ 4.8 g/t gold in the granitic rocks underlying the gold-in-oxide blanket. This drilling will determine the dimensions and grade of the new mineralized zone.

Whilst the focus of the drill campaign during 2022 will remain on the MG and Central trends, and the targets in and around those trends (notably PDM in the Central trend and Machichie at MG), Cabral will continue to test the various regional targets at Cuiú Cuiú and is currently planning drilling at Tracaja, Indio, Dona Moca and the new Escondido target.

To view the source version of this press release, please visit https://www.newsfilecorp.com/release/109245