Baroyeca Receives Assays up to 772.45 and 561 g/t AgEq from Five Additional Drill Holes at the Atocha Project in Tolima, Colombia

Vancouver, British Columbia--(Newsfile Corp. - January 5, 2022) - BAROYECA GOLD & SILVER INC. (TSXV: BGS) (the "Company") is pleased to announce further assay results from its phase 1 drilling program at its flagship Atocha high-grade silver project in Tolima, Colombia. The Company issued the results of its first two holes from the program in its news release dated November 16, 2021, some of the results of which are repeated below for continuity purposes. The focus of this release is the results from holes three through seven. The Company has completed one additional hole (hole eight) for which the Company is currently awaiting assay results and is drilling hole nine at the time of writing this press release.

Baroyeca has drilled eight holes at La Ye as part of an ongoing drill program which has to date covered approximately 200m of strike length of the vein corridor from its north-easternmost end. Drilling has already identified one high-grade mineralized zone or shoot near surface at La Ye that will be followed at depth in future delineation drilling campaigns once the company identifies and prioritizes other high-grade mineralized zones in different vein sets. Phase 1 drilling started targeting the San Antonio vein as the primary master vein at La Ye, which is an approximately 4 meter wide breccia/vein zone comprised of two larger (0.5 to 1 meter) well developed parallel quartz-sulfide rich veins located at the edges of the vein zone, that includes a dense set of veinlets and spur veins between them. There is also a parallel vein situated 25m to the north of the San Antonio vein, intersected in holes 3 to 8 at shallow depths, and several other narrow veins parallel to the San Antonio vein toward the south (footwall), that are producing anomalous values. These secondary veins have been mapped and can be followed at surface toward the southwest, in which direction the Company's drill program is intended to proceed. Drilling is following these veins as linked structures probably forming an echelon pattern of shoots within them along the main shear/vein corridor.

(*) True thickness to be further calculated with additional drilling from different orientations. AqEq converted using a silver to gold ratio of 75:1 assuming recoveries of 100%. 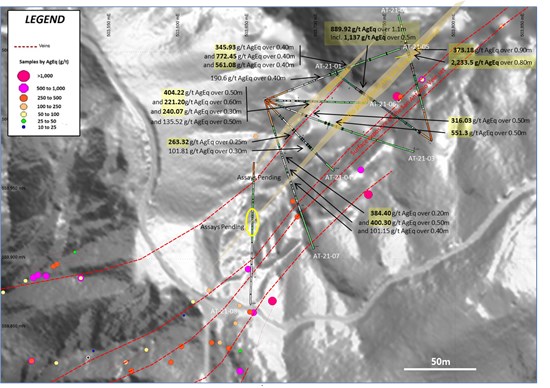 Drill hole AT 21-08 has been completed and samples submitted to SGS for preparation and analysis. At the date of this news release, the Company is still awaiting the results of their analysis from SGS.

The ninth hole is underway as part of Baroyeca's initial 2,500m phase 1 drilling program at the La Ye vein system, targeting three silver-gold bearing vein zones at depth which have been mapped at surface. 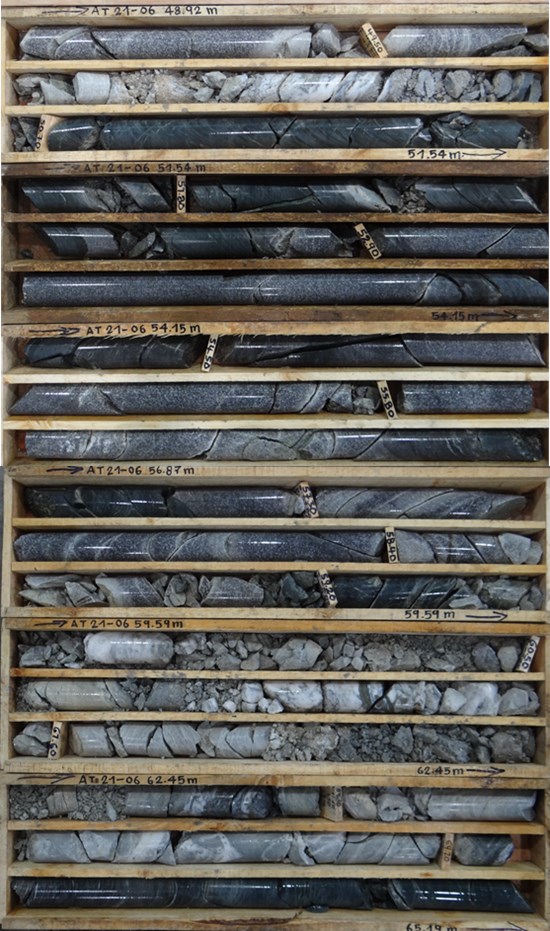 Raul Sanabria, P.Geo., President of Baroyeca commented: "We are pleased to see more high-grade results coming from ongoing drilling on the La Ye vein system. We have confirmed the presence of multiple stacked parallel vein sets and are progressing to establish the geometry of the shear corridor which hosts the mineralized zones within them. Our systematic approach to delineating the structure by moving along its strike length is allowing us to much better determine the distribution of ore shoots, vein bulging and vein splays. Drilling continues to move along toward the southwest where the vein splays into a wider zone and where we found higher grades in outcrop and float at surface."

Rock samples are shipped by transport truck in sealed woven plastic bags to SGS sample preparation facility in Medellin, Colombia for sample preparation and analysis. Baroyeca implements QA/QC best practices and per every 21 samples, three certified control samples are inserted (one blank, one standard and one field duplicate). SGS operates according to the guidelines set out in ISO/IEC Guide 25. Gold is determined by fire-assay fusion of a 50 g sub-sample with atomic absorption spectroscopy (AAS). Samples that return values >10 ppm gold from fire assay and AAS are determined by using fire assay and a gravimetric finish. Silver is analyzed by inductively-coupled plasma (ICP) atomic emission spectroscopy, following multi-acid digestion. Silver is determined by ore grade assay for samples that return >500 ppm.

Baroyeca Gold & Silver Inc. is a mineral exploration company focused on high-grade silver and gold projects located in Colombia. Baroyeca's flagship asset is the high-grade Atocha Silver-Gold Project located in Tolima Department, Colombia. The Company also holds an option to acquire a 100% interest in the Santa Barbara Property, Bolivar Department, Colombia, which is renowned for its high-grade gold mineralization and vein density. Current exploration activities on the Santa Barbara Property involve the bulk sampling of vein structures, which material then feeds into a trial production facility which has consistently been producing gold for over a year. The revenue from the sale of produced gold defrays part of the operating costs. The Company is planning to expand these activities.

The Company's Board and senior management are committed to creating shareholder value through the discovery process, careful allocation of capital, and environmentally and socially responsible mineral exploration.

Raul Sanabria, M.Sc., P.Geo., President of Baroyeca Gold & Silver Inc. and a qualified person ("QP") as defined by Canadian National Instrument 43-101, has reviewed and approved the technical information contained in this release.

The Company held its Annual General Meeting of shareholders by telephone conference call on December 31, 2021, with voting conducted by submission of proxies. The business presented to the Meeting was all routine in nature and all matters were approved by the shareholders. Raul Sanabria, Richard Wilson, Douglas Eacrett and William Carr were re-elected as directors for the ensuing year.

Neither the TSX Venture Exchange nor its Regulation Services Provider accepts responsibility for the adequacy or the accuracy of this release.

To view the source version of this press release, please visit https://www.newsfilecorp.com/release/109056

Sign up to receive news releases by email for Baroyeca Gold & Silver, Inc. or all companies belonging to the Precious Metals, Mining and Metals industries.