Vancouver, British Columbia--(Newsfile Corp. - December 16, 2021) - The board of International Lithium Corp. (TSXV: ILC) (the "Company" or "ILC") is pleased to announce the further expansion of its Raleigh Lake lithium and rubidium project in Ontario, Canada where it now has claims totalling over 47,000 hectares (470 square kilometres), an increase of more than 20,000 hectares from the previously announced 27,000 hectares (October 25, 2021). At the same time the Company announces the completion of an exploration program at Raleigh Lake and the discovery of several new pegmatite occurrences within the expanded claim holdings.

International Lithium Corp. carried out a field program at the Raleigh Lake project in October 2021 which included a regional lithogeochemical survey within the newly expanded historical claim group, a biogeochemical orientation survey over the main pegmatites in Zone 1, regional prospecting and mapping of cut blocks within the historical claim group and a cursory examination of highly prospective ground recently acquired through staking. Highlights of the recent work include the discovery of over 20 new and previously unknown pegmatites within the newly acquired mineral claims.

Given the sizeable area and the number of new claims, the project is being divided according to geographic parameters and certain controls on the type of mineralization styles within these zones (Figure 1): 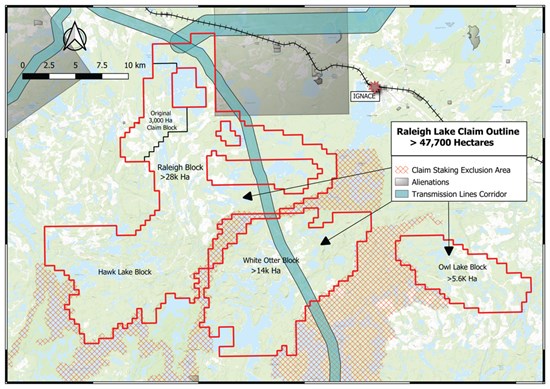 The Fall 2021 exploration program carried out over the month of October included three major activities that were designed to identify and prioritise targets for future exploration focus, drilling and eventual resource evaluation.

A total of 1089 lithogeochemistry samples were collected between September 29th and October 30th (Figure 2). The primary goal for this component of work was to test for exomorphic dispersion of lithium and other rare-metals into the volcanic, volcaniclastic and subvolcanic intrusions of the host greenstone belt. The bedrock sampling program also ensures a systematic examination of outcrops are completed while conducting traverses.

Sampling lines were designed to mesh seamlessly into the grids of historical work programs. The sampling procedure at each site mirrored historical procedures with the goal to minimize levelling of data between seasons. The results for this program will be evaluated and related to earlier work in order to determine if further levelling is required to merge with the historic data sets or alternatively be analysed independently of historical results.

Analytical results are still under process at the time of writing. 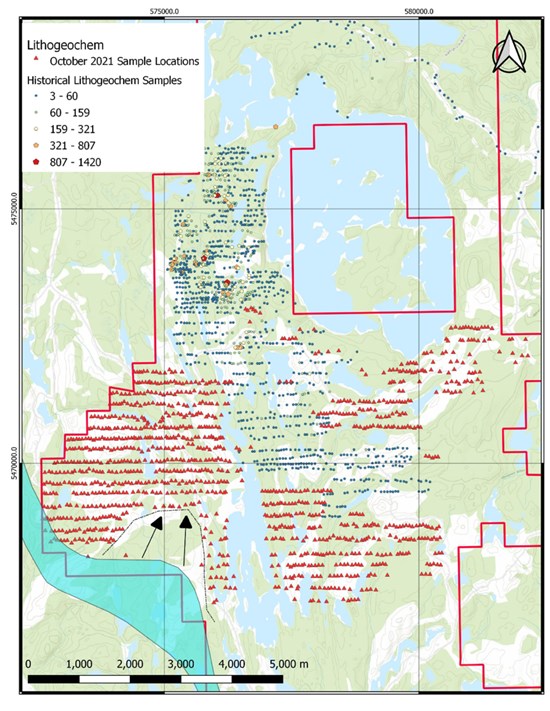 To fully understand the mineral and exploration potential of the newly discovered White Otter pegmatites to host lithium, caesium, rubidium, tantalum and associated mineralization typical of LCT-type pegmatites, a total of 48 channel samples were collected across the claim group (Figure 3). Forty-one (41) were collected from rare-metal prospects and new pegmatite discoveries and seven (7) were collected from base-metal and gold prospects.

Final results for all channel samples are still pending, however, some mineralogical work was fast-tracked on the rare-metal pegmatite channel samples and those results have been released and are currently being fully evaluated. Initial implications are that most of the 16 White Otter pegmatites have reported highly anomalous rubidium values and no associated lithium bearing minerals indicating that the rubidium is likely to be present in the potassium feldspar minerals. The elevated rubidium to potassium ratios in these samples coupled with high rubidium/strontium ratios indicates that these pegmatites are derived from a peraluminous source and have a high probability to host lithium-bearing deposits enriched in caesium and rubidium minerals, among others. This conclusion is further supported by the high manganese values coincident with abundant orange spessartine garnets observed in some of the samples. 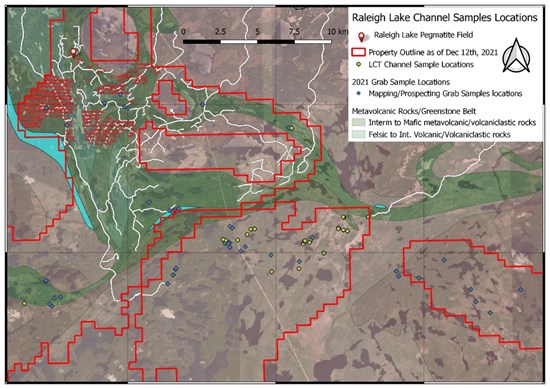 In conclusion, the Company is highly encouraged by the results of the program whereby such a high number of previously unknown pegmatites were discovered in such a short time during a field program originally designed to advance and expand the highly prospective pegmatite discoveries on the original 3,000 hectare Raleigh Project claim block. The Company is planning for an extensive exploration campaign in 2022 that will further evaluate the potential of the entire Raleigh Lake project area.

"This was a very encouraging exploration program, with over 20 new pegmatites discovered at ground level over multiple kilometres. A consistent theme is that the Raleigh Lake project is a mineral rich area with appreciable anomalous (i.e. high) amounts of rubidium as well as lithium. This mineral richness and the extent of the pegmatites is why we expanded and expanded again our claims area beyond what we originally intended. 47,000 hectares is the size of the city of Stuttgart, and larger than the cities of Montreal, Denver or Detroit - so clearly this program will require various stages and careful planning. Analysis laboratories are stretched at the moment, and we are still waiting for some of the results, with an equipment failure at one of the third party laboratories holding us up even beyond the expected waiting period. Once we get all these results we will rapidly decide on the optimal drilling program for Raleigh Lake in 2022 with a view to getting some resource estimates in 2022 from a portion of our claims."

International Lithium Corp. believes that the '20s will be the decade of battery metals, at a time that the world faces a significant turning point in the energy market's dependence on oil and gas and in the governmental and public view of climate change. Our key mission in this decade is to make money for our shareholders from lithium and rare metals while at the same time helping to create a greener, cleaner planet. This includes optimizing the value of our existing projects in Canada and Ireland as well as finding, exploring and developing projects that have the potential to become world class lithium and rare metal deposits. In addition, we have seen the clear and growing wish by the USA and Canada to safeguard their supplies of critical battery metals, and our Canadian Raleigh Lake property is strategic in that respect.

A key goal has been to become a well funded company to turn our aspirations into reality, and following the disposal of the Mariana project in Argentina in 2021, the Board of the Company considers that ILC is already well placed in that respect with a strong net cash position. The disposal of Mavis Lake, assuming the option is exercised as planned, will add useful further liquidity.

The Company's primary strategic focus is now on the Raleigh Lake lithium and rubidium project in Canada and on identifying additional properties.

The Raleigh Lake project now consists of over 47,000 hectares (470 square kilometres) of adjoining mineral claims in Ontario, and is ILC's most significant project in Canada. The exploration results there so far, which are on only about 5% of ILC's current claims, have shown significant quantities of rubidium and caesium in the pegmatite as well as lithium. Raleigh Lake is 100% owned by ILC, is not subject to any encumbrances, and is royalty free.

The ownership of the Mavis Lake project is currently 51% Essential Metals Limited (ASX: ESS, "ESS") and 49% ILC. In addition, ILC owns a 1.5% NSR on Mavis Lake. ESS has an option to earn an additional 29% by sole-funding a further CAD $8.5 million expenditures of exploration activities, at which time the ownership will be 80% ESS and 20% ILC. Mavis Lake is now under option until January 2022 to Critical Resources Ltd. (ASX: CRR) to buy 100% at which point ILC's NSR would also be surrendered. If exercised, that option will bring the Company approximately CAD$1.4m of cash and shares in CRR, with up to a further CAD$1.4m if certain resource targets are achieved by CRR. If CRR were to complete its purchase but then sell or joint venture the Mavis Lake claims in future, this further payment obligation would pass to any future owner of the claims. ILC and ESS would have a right of first refusal to buy the claims back if CRR had not achieved and made additional payment for the first additional payment milestone.

To view the source version of this press release, please visit https://www.newsfilecorp.com/release/107795