Vancouver, British Columbia--(Newsfile Corp. - December 7, 2021) - Sanatana Resources Inc. (TSXV: STA)  ("Sanatana" or the "Company" reports on exploration at its Oweegee Copper-Gold project in the Golden Triangle region in British Columbia. The Oweegee Dome project is the subject of an option agreement between Sanatana and ArcWest Exploration Inc. ("ArcWest").

Assays have been received from our sampling program conducted in the third and fourth quarters of 2021. A total of 220 grab samples from outcrop or nearby float derived from outcrops were taken while our geological crews systematically mapped from east to west over the Delta prospect. The purpose of the sampling was to assist in alteration mapping and to give alteration/ element vectors; the samples were not necessarily well mineralized. Of the grab samples, 18 assayed over 0.1 g/t gold and 6 over 0.5 g/t Au, the highest value being 3.82 g/t Au and 12 assayed with greater than 0.1% Cu the highest assaying 1.09% Cu with seven over 0.5% Cu. The higher Cu and Au values cluster around the previously reported Molloy Zone. (See figure 1 and 2).

Buddy Doyle, President of Sanatana commented, "Our initial interest in the Oweegee property was triggered by its Golden Triangle address and the phyllic alteration which was unusually elevated in copper and gold at Delta ridge. This area had been previously drilled by 16 shallow holes looking for an Eskay Creek type VMS. The best intercept from historic work was 86.3 m of 0.10% Cu and 0.228 g/t Au. Sanatana interprets this to be possibly the top of a yet-to-be-unroofed copper/gold porphyry system with better grades at depth or laterally to this historic drilling.

"It is very pleasing to see this summer's field work has reinforced and strengthened this concept including the identification of numerous diorite intrusives and breccias on the ridge and moreover the recognition and sampling of the Molloy zone, northwest of the ridge. We believe that the Molloy Zone represents a daylighting shoulder of a larger copper-gold mineralized system that has never been drill tested."

Jeff Kyba, VP Exploration for ArcWest, who led this year's field work, commented, "The high gold-to-copper ratios, alteration assemblage and quartz-sulphide veining at Molloy are very similar to well-documented mineralization at Seabridge Gold's KSM deposits located 45km to the west. The rocks at Molloy are distinct from the phyllic alteration in the historic drilling to the southeast of this zone (Delta Ridge) and is consistent with a transition towards a porphyry centre. The Molloy Zone will be a major focus of our work in 2022 when we plan to drill test this target."

Peter Miles, CEO of Sanatana, commented, "Our 2021 exploration success at Oweegee combined with industry and investor interest focused on the Golden Triangle of BC, highlighted by Newcrest Mining's recent $3.5 billion takeover of Sanatana's neighbor Pretium, should provide an exciting 2022 for Sanatana shareholders".

As well as highlighting the diorite intrusives at Delta ridge, and the high copper-gold zone at Molloy, this year's field work identified potassic altered diorite intrusives at the Snowpatch Zone at the Western edge of the Delta prospect. Though intensely altered, these rocks they are only moderately stockworked and are therefore only moderately elevated in copper and gold. This zone is far enough from Molloy (1.8km) to be considered a different system. Again we point to the nearby KSM deposit where there is a cluster of deposits within a 10km stretch; it is not uncommon to get porphyry systems that cluster. The plan here is to further map the extent or the potassic zone paying attention to vein densities to vector towards higher grade zones. Figure 5 is an image highlighting the vein density and potassic alteration of a typical rock from this zone. 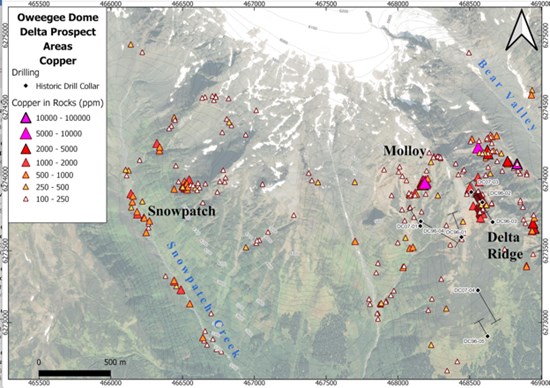 Figure 1 Recent and Historic rock grab samples assayed for copper. The symbol is sized and colour based on the assay result. Clustering of higher-grade samples demonstrate zones of greater interest, especially if porphyry style alteration and veining are noted. The phyllic altered Delta Ridge, the intensely veined Molloy Zone and the potassicaly altered Snowpatch zones all mentioned in the text are highlighted. UTM WGS84 Zone 9. 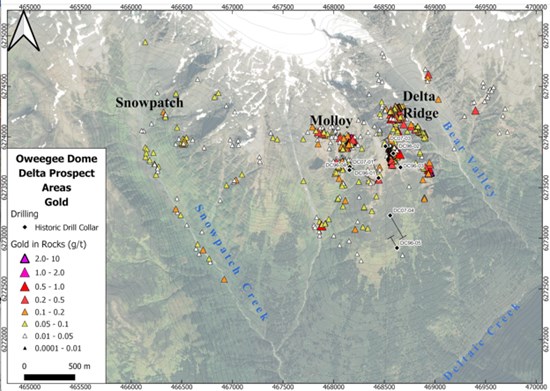 Figure 2 Recent and Historic rock grab samples assayed for gold. The symbol is sized and colour based on the assay result. Clustering of higher grade samples demonstrate zones of greater interest, especially if porphyry style alteration and veining are noted. The phyllic altered Delta Ridge, the intensely veined Molloy Zone and the potassicaly altered Snowpatch zones all mentioned in the text are highlighted. UTM WGS84 Zone 9. 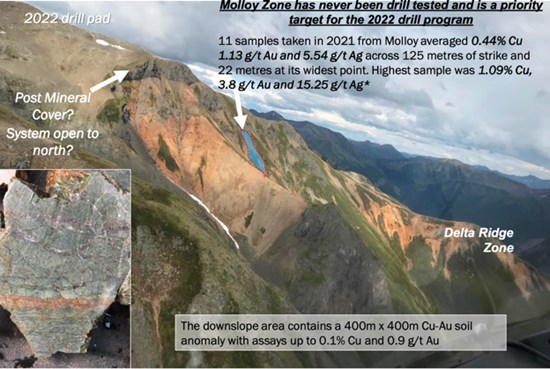 Figure 3 Annotated photograph of the Delta Ridge and Molloy portions of the Delta Prospect. Rock shown in inset described in figure 4. Our current thinking is the Molloy Zone depicted in blues is a small window into a bigger system mostly obscured by the upper Phyllic alteration that makes up the colour in soil anomaly apparent in the image, and by younger unaltered cap rocks. To be drilled in 2022. 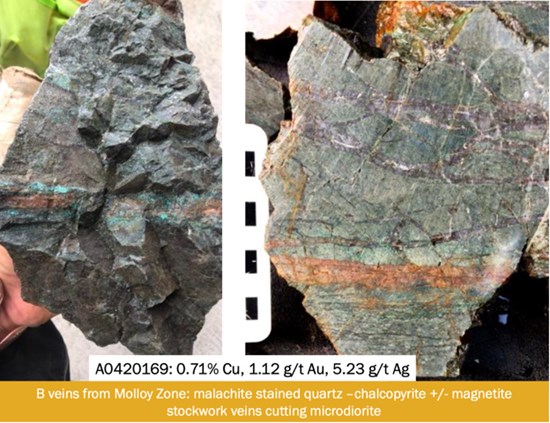 Figure 4 An example of the rocks found at the Molloy Zone, note the copper staining and the intense vein stockwork, the veins contain sulphide centers with potassic halos. 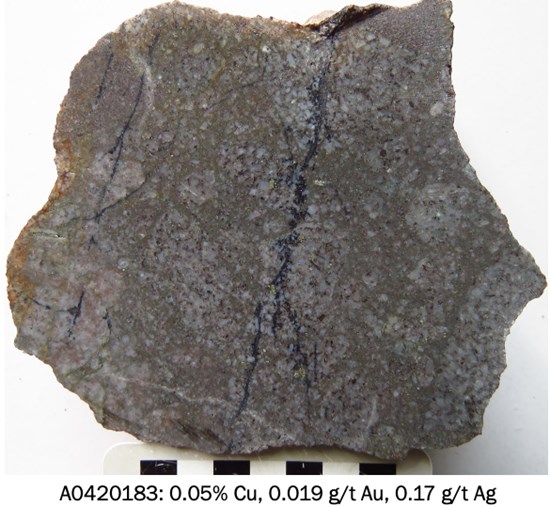 Figure 5. An example of the rocks found at the Snowpatch Zone showing intense potassic alteration hosted by a diorite breccia, with moderation veining. Elevated in Copper and Gold. Future work will attempt to vector into two zones of more intense stockwork with this alteration envelope.

The samples referred to in this news release, were sent using a chain of custody to ALS Kamloops sample process facility and then to Vancouver for assay, where they undertook total digestion using a four-acid attack. Gold was determined using a fire assay with AAS finish. Multi-element ICPMS was used for 56 other elements including silver. Internal laboratory standards were applied and were compliant as well as company submitted known standards. The reader should be made aware that grab samples do not necessarily translate to grade and resources and here they are being primarily used to characterize and prioritize, and to demonstrate if the system contains copper and gold.

Sanatana Resources Inc. is a mineral exploration and development company focused on high-impact properties in Canada. With an award-winning technical team and experienced management and board of directors, Sanatana is based in Vancouver and is listed on the TSX Venture Exchange (TSXV: STA).

To be added to the email distribution list, please email ir@sanatanaresources.com with "Sanatana" in the subject line.

To view the source version of this press release, please visit https://www.newsfilecorp.com/release/106916

Sign up to receive news releases by email for Sanatana Resources Inc. or all companies belonging to the Mining and Metals industry.