Toronto, Ontario--(Newsfile Corp. - November 25, 2021) - Cerrado Gold Inc. (TSXV: CERT) (OTCQX: CRDOF) ("Cerrado" or the "Company") is pleased to announce its operational and financial results for the third quarter of 2021 ("Q3/21"). The third quarter represents the final quarter of restructuring of operations at its Minera Don Nicolás ("MDN") Mine in Santa Cruz Province, Argentina, with the stage set for substantially improved results from operations in Q4. The financial results are reported and available on SEDAR as well as on the Company's website (www.cerradogold.com).

(All numbers reported in US dollars)

Mark Brennan, CEO and Co-Chairman stated: "It has been extremely gratifying to see the strong performance delivered by Cerrado's Argentinian team in the third quarter. Our restructuring program implemented post acquisition of MDN continues to bear fruit as demonstrated by our successful Q3 results. The Company is now positioned well to deliver consistent and strong results going into Q4 and we fully expect to see continued improvement in all key operating and financial metrics." 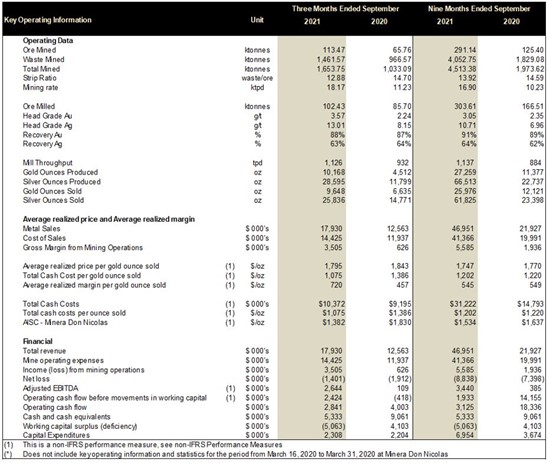 To view an enhanced version of this graphic, please visit:
https://orders.newsfilecorp.com/files/7487/105193_capture.jpg

Net loss for the three months ended September 30, 2021, was $1.4 million as compared to $1.9 million for the three months ended September 30, 2020, an improvement of $0.5 million. The decrease in net loss is primarily a result of a mine operating margin of $3.5 million (an increase of $2.6 million) offset by an increase in general and administrative expenses of $0.8 million and an increase of other expense by $1.0 million. Net loss in the third quarter of 2021 also represented a $0.4 million improvement as compared to Q2 2021.

The scientific and technical information contained in this press release has been reviewed and approved by Sergio Gelcich, P.Geo., Vice President, Exploration for Cerrado Gold Inc., who is a "qualified person" as defined in NI 43-101.

To view the source version of this press release, please visit https://www.newsfilecorp.com/release/105193