Vancouver, British Columbia--(Newsfile Corp. - November 12, 2021) - Tower Resources Ltd. (TSXV: TWR) ("Tower" or the "Company") is pleased to report that infill till sampling on the exceptionally strong gold grain anomaly that Tower identified in May (see press release dated August 10, 2021) near Dominic Lake on the Company's Rabbit North porphyry Cu-Au property near Kamloops, B.C. (Fig. 1) has transformed the anomaly into a classic gold dispersal train and resolved the probable bedrock source of the gold sufficiently for an initial diamond drill test.

In the May reconnaissance survey, two 10 kg till samples, Nos. 058 and 059 (Fig. 1) collected 200 m apart on a line across the southeast glacial ice flow path 200 m northwest of Dominic Lake and 1 km south of the highly prospective Durand Stock, yielded exceptionally strong, 617 and 540-grain gold anomalies. In October, 24 infill samples including 2 duplicate samples were collected from 22 sites 100 m apart along this line and on four parallel lines every 200 m up-ice to the northwest for a total distance of 800 m. Remarkably, the samples from 20 of the 22 sites contained more than 200 gold grains, with five exceeding 500 grains (Fig. 2). Together these and the two earlier samples define the strongest and most consistent gold grain dispersal train ever identified on a porphyry Cu-Au project in British Columbia, suggesting that the source mineralization is both substantial and unusually gold rich.

Samples collected along the northwest-southeast trending axis of the dispersal train typically contain 300-700 gold grains while those for 150 m to either side of the axis typically contain 150-300 grains for a total defined width of 300 metres (Fig. 2). By comparison, the peak gold response obtained from a very similar till survey performed by the federal and provincial governments at the Mount Polley open pit mine (past production of 118.8 million tonnes at 0.227% Cu and 0.277 g/t Au) was only 105 grains.

The dispersal train appears to narrow up-ice as expected but neither the total number of gold grains per sample nor the proportion of pristine grains to glacially deformed grains increases systematically up the train. This suggests that instead of having a point source at the head of the train the gold grains are derived from an elongate to linear mineralized zone that is oriented parallel to and directly underlies the dispersal train. The consistently high number of gold grains along the train further implies that the mineralized zone is several hundred metres long and is well mineralized throughout its length. A preliminary diamond drill test is planned as soon as a suitable drill can be secured.

The dispersal train is situated on a till plain that slopes gently southeast toward Dominic Lake in sympathy with the southeast sloping surface of the underlying bedrock. The thickness of the till on this plain is known to be approximately 20 metres. That so many gold grains were elevated 20 m to the surface of the till after such a short distance of glacial transport is probably due to the bedrock slope being downhill in the direction of ice flow, a relationship that is also observed at the large Blackwater gold deposit northwest of Kamloops.

The known Chrysocolla Zone, a Cu-Au zone with a central Au subzone, is only 300 m north of the northernmost line of till samples collected in October (Figs. 2, 3). The mineralized zone trends southeast parallel to the gold grain dispersal train and is only 150 m northeast across-ice from the axis of the train. The closest of 17 historical diamond drill holes on the Chrysocolla Zone intersected a 133 m mineralized interval averaging 0.19% Cu and 0.31 g/t Au, while one hole in the Au subzone returned 10 m of 12.5 g/t Au.

While the Chrysocolla Zone is close to the dispersal train, its topographic and geologic settings (Figs. 2, 3) are very different from those of the train. The Chrysocolla mineralization is hosted by the Durand Stock. It crops out on a bare ridge that stands 30 m above the surface of the adjacent till plain on which the dispersal train is located, and 50 m above the bedrock beneath the train which appears to be mainly of volcanic rather than intrusive origin.

If the main source of the Dominic Lake dispersal train is a porphyry Cu-Au zone rather than a shear-hosted Au zone, the host till would have contained high concentrations of Cu-sulphide grains in addition to the observed gold grains before it underwent sulphide-destructive post-glacial weathering. Most of the leached Cu appears to have been eliminated from the soil profile because the known Cu-Au showings in the Durand Stock (Fig. 3) are poorly reflected in Cu analyses from historical soil geochemical surveys that covered the stock.

In addition to the 24 infill till samples, 79 samples were collected at a reconnaissance spacing similar to that used the inaugural May survey of the Core Claims on the Durand Stock (Fig. 1) and adjoining Southern Extension claims to the south. The objective of the reconnaissance sampling is to locate gold grain dispersal trains that are larger and stronger than those associated with the known Cu-Au zones in the Durand Stock and thus indicative of larger and/or higher grade Cu-Au deposits that extend to surface and have a high potential for development by open pit methods.

As in the inaugural till survey in May, Overburden Drilling Management Ltd. (ODM) planned and executed the till survey and is processing the samples for gold grains at its heavy indicator mineral laboratory in Ottawa, Ontario. 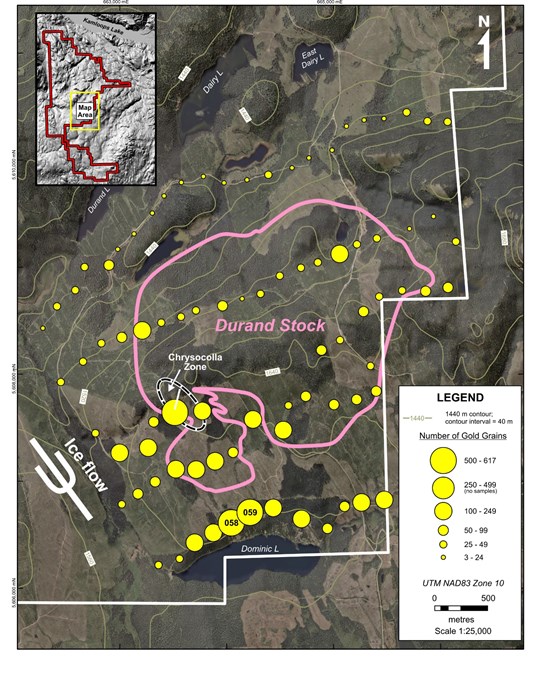 Figure 1 - Gold grain abundance per 10 kg of till over and near the Durand Stock as determined from the May till survey. Samples 058 and 059 yielded 617 and 540 gold grains, respectively. 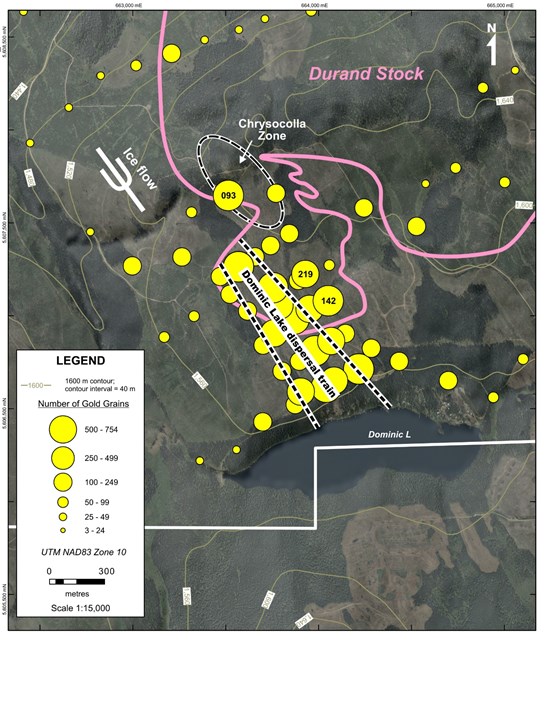 Figure 2 - Gold grain abundance per 10 kg in the Dominic Lake dispersal train. Note the apparent presence of a second, narrower dispersal train to the east of Samples 093, 219 and 142 in line with the Chrysocolla Zone. 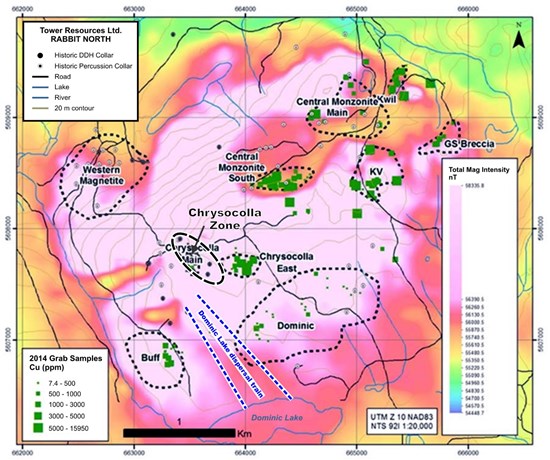 To view the source version of this press release, please visit https://www.newsfilecorp.com/release/103205