Toronto, Ontario--(Newsfile Corp. - May 29, 2021) - MOVE Network is pleased to announce that they have partnered with America's film industry mogul, Sid Ganis. Ganis has had a distinguished career in Hollywood as a top executive at major studios including Sony Pictures, Lucasfilm, Warner Bros. and Paramount. He served on the board of directors of Marvel Entertainment until its sale to Disney in 2009 and is well respected throughout the film industry as the former president of the Academy of Motion Picture Arts and Sciences, a prestigious position he held for four consecutive years. MOVE Network's collaboration with Ganis fills a gap in the current NFT crypto marketplace with access to an unprecedented level of intellectual properties. With its philosophy of partnering with key industry titans, and expanding the scope of accessible and available IPs, MOVE is set in motion to becoming the world's leading aggregator of non-fungible tokens (NFT's) to the MOVE Community. 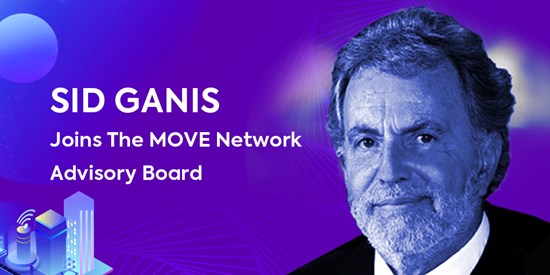 Sid Ganis, an experienced executive who made a film career in marketing and publicity at several studios, including 20th Century Fox, Columbia Pictures, Seven Arts and Warner Bros. He participated in a multitude of organizations including serving on the board of directors at Marvel Entertainment for ten years, Center Theater Group, Direct Sports Network (formerly DeskSite) as well as on the Boards of Film Independent, SF FILM, the Berkeley Art Museum/Pacific Film Archive, and various film festivals and film organizations around the world. He eventually joined Lucasfilm, where he served as Senior Vice President for several years. There he was responsible for marketing The Empire Strikes Back, Return of the Jedi and the first two installments of the Indiana Jones trilogy. Ganis also worked at Paramount Pictures and eventually became president of the Motion Picture Group, where he helped launch Top Gun and Fatal Attraction. As president, he oversaw the development and production of the worldwide hit Ghost, and bought the underlying rights to Forrest Gump, which would go on to become one of Paramount's biggest hits-both financially and critically-of all time. Ganis also became president of marketing and distribution at Columbia Pictures. He was eventually made vice chairman of the studio and he stepped down to produce via his independent production company, Out of the Blue Entertainment. Under this company, Ganis co-executive produced ABC's Pan Am with his wife, Nancy Hult Ganis, who created this show. Ganis was co-founder and Chairman of Jiaflix Enterprises, a US company with a long-term exclusive arrangement with the China Movie Channel and the website 1905, both under SAPPRFT (SARFT). He has been working extensively in China drawing on his deep industry relationships and experiences for various film projects. In addition to opening doors for international studios entering China, his motion picture acumen was highly sought after by Wuxi Studios near Shanghai, where he served as Honorary Chairman. Jiaflix was an important part of the record-breaking success of Transformers: Age of Extinction in China for Paramount Pictures, surpassing the previous box office record of Avatar. Currently he is producing the feature film A Children's Song with partners at The H Collective Holdings in Los Angeles.

"The film industry is constantly changing and innovating. I have been lucky to be a part of those changes for many years. Now movies and content are moving into the crypto marketplace via NFTs, which is another major shift into the 21st Century world of global entertainment. I am very happy to bring what I know to the process," said Sid Ganis.

During its initial act, MOVE Network will offer its MOVE Community an expansive menu of blockchain technologies specializing in NFTs and extensive IP licensing. "Our MOVE Network will provide IP creators with ultimate control over their assets, security and peace of mind for transactions done on the MOVE Market - where exclusive content can be bought, sold, and traded by end-users using cryptographic token assets across a multitude of IP categories including entertainment, music, artwork and sports." said Daniel Bokun, Co-founder, and President of MOVE Network.

MOVE Network sets out to be the world's largest NFT aggregator covering a wide spectrum of NFT products. MOVE Network allows enterprises and start-ups to capture value today by using blockchain technologies to trade, stake, create and auction assets. The MOVE Network comprises the MOVE market, the $MOVD token and the MOVE Chain. Users can use MOVE Network to own NFT IPs covering entertainment, music, artwork, and eSports. The MOVE team collaborates with different IP distribution partners for NFT issuance in Asia and North America and has recently raised US$1.5 Million in seed round investment.

For additional information about MOVE Network, learn more at WWW.MOVENETWORK.IO

To view the source version of this press release, please visit https://www.newsfilecorp.com/release/85763