Vancouver, British Columbia--(Newsfile Corp. - May 10, 2021) - Endurance Gold Corporation (TSXV: EDG) (the "Company") is pleased to provide an update on the pXRF geological evaluation of the reverse circulation ("RC") drill program in progress at its Reliance Gold Property (the "Property") in southern British Columbia. The Property is located 4 kilometres ("km") east of the village of Gold Bridge with year-round road access, and 10 km north of the historic Bralorne-Pioneer Gold Mining Camp which has produced over 4 million ounces of gold.

The drill program commenced on April 21, 2021 and twenty-three (23) drill holes have been completed so far. Portable X-Ray Fluorescence ("pXRF") of the RC samples has identified significantly enriched arsenic ("As") in 17 of the 23 RC drill holes completed to date. New pXRF As-enriched zones have been identified on the Treasure Prospect (located on the Treasure Shear) and the Diplomat Zone. Additional As-enriched mineralization has also been identified at the Eagle Zone where step out drilling from the encouraging 2020 RC drill holes is ongoing. The widest and strongest arsenic mineralized intervals identified with the pXRF to date are reported in the table below.

The two most significant pXRF results reported in this release include: 2,294 parts per million ("ppm") pXRF As over 27.4 metres ("m") at the Eagle Zone and 10,472 ppm pXRF As over 4.6 m from a new mineralized structure at the Diplomat Zone. In addition, the first drill test of the Treasure Shear at the Treasure Prospect has returned 1,828 ppm pXRF As over 9.1 m indicating the potential for this structure to also be gold-bearing. Three figures showing the location of the RC drill holes completed and the surface projection of the pXRF As intervals are appended below and available on the Company website.

As reported on January 6, 2021, the pXRF technique does not report quantifiable gold but previous work by the Company has shown that arsenic has a strong positive correlation with gold mineralization on the Reliance Property. The drill assay results reported on March 16, 2021 from the Company's 2020 RC program confirmed the pXRF arsenic intervals ultimately identified gold mineralized intervals at the Eagle and Imperial Zones.

Diplomat Zone pXRF Results - The Diplomat Zone is also located within the 1.2 km long broad iron carbonate alteration envelope of the Royal Shear, 170 m northwest of the Imperial Zone and 625 m northwest of the Eagle 3 outcrop area at the Eagle Zone. Diplomat is expressed as an iron carbonate altered area forming prominent outcrop exposures of the Royal Shear. There is also an associated high quality soil and biogeochemical anomaly. Eight holes have been completed to date at Diplomat. Seven of the holes have returned significant arsenic as summarized in the above table with the most encouraging intersections of 10,472 ppm pXRF As over 4.6 m. Some of the Diplomat holes have multiple intervals of elevated arsenic. Mineralization is associated with both a wider lower grade arsenic content, typically near surface, and a deeper higher arsenic content zone associated with a steeply dipping quartz sulphide vein with a similar strike and dip as the Imperial Zone. Further drilling is required to determine the strike length of this zone. There is only minor associated antimony with these three intersections at the Diplomat Zone.

Eagle Zone pXRF Results - The Eagle Zone has more elevated pXRF antimony ("Sb") than the other two prospects reported in this release. To date, nine additional holes have been completed in the current ongoing RC drilling program at the Eagle Zone. Drilling has successfully delimited the northwestern strike extension of the Eagle Zone and is now expanding the southeastern strike and down dip potential. Seven of the holes have returned significant pXRF arsenic as summarized in the above table with the most significant interval reported as 2,294 ppm pXRF As and 1,875 ppm pXRF Sb over 27.4 m. Due to the angle and direction of the drill holes, true width for the two widest pXRF As zones in RC21-037 and RC21-039 are interpreted to be about 50% of the drilled interval. The RC holes that did not intersect pXRF As intervals at the Eagle Zone were either designed to close off the system to the northwest and primarily drilled in the footwall of the shallow dipping Eagle Zone or are interpreted to have intersected a wide feldspar porphyry dyke which intrudes through the zone at one hole location.

As part of the current RC drill program, further RC holes are being considered for the Treasure Prospect, Diplomat and Eagle. A compilation of the RC drill sections at these Zones will be provided in future updates.

Eagle Zone Geology - The furthest southeast road cut outcrop exposure of the Eagle Zone, namely the Eagle 3 channel sampled outcrop (see press release dated November 16, 2020) was further excavated by hand to better expose the geology and structural fabric related to Eagle Zone. A labelled photo of the outcrop is appended to this release and available on the Company website. Where observed at surface, the Eagle Zone can be seen to consist of a strongly oxidized shallow dipping brittle-ductile shear zone containing a narrow shear-parallel quartz-antimony vein. The largest volume of the shear exposure width is interpreted to be a low-silica sulphide rich shear with the oxidation colours related to breakdown in the weathering profile of the iron carbonate alteration, pyrite, arsenopyrite and stibnite. The individual channel samples collected at this location were reported in November 2020 and returned 14.1 grams per tonne ("gpt") gold, 1,220 ppm Sb and 7,440 ppm As over 1.83 m. The adjoining channel sample partially shown at the left of the photo returned 15.15 gpt gold, 4,390 ppm Sb and 7,860 ppm As over 1.83 m.

Current Activity - Drilling will continue in May with the budgeted completion of at least 40 RC drill holes. A total of 286 RC samples from six of the initial holes drilled have been submitted to the laboratory for gold assay and multi-element ICP analysis. Complete gold assays for these first holes are expected in late May and results will be reported when received. The IP geophysical crew is expected to mobilize to the property shortly. Results from the RC drilling and IP geophysics will be used to assist in defining and prioritizing diamond drill targets for later in the season.

RC samples were collected under the supervision of a geologist at the drilling rig. Drilling was completed using a 3.5 inch hammer bit and rock chip samples were collected using a cyclone. Sample size were reduced to 1/8th size with a riffle splitter at the drilling rig. A second duplicate split and coarse chips were collected for reference material and stored. All RC samples are or will be submitted to ALS Global in North Vancouver, BC, an ISO/IEC 17025:2017 accredited laboratory, where they are crushed to 70% <2 mm then up to 250 gram pulverized to <75 microns. Samples are then submitted for four-acid digestion and analyzed for 48 element ICP-MS (ME-MS61) and gold 30g FA ICP-AES finish (AU-ICP21). Over limit samples returning greater than 10 ppm gold are re-analyzed by Au-GRA21 methodology and over limit antimony returning greater than 10,000 ppm Sb are re-analyzed by Sb-AA08 methodology. The pXRF analysis was conducted by a Company geologist at the project site on the RC coarse chips that were saved as reference material. An Olympus Vanta XRF Analyzer was used for the analysis which is capable of measuring elements from concentrations as low as single parts per million (ppm). The work program was supervised by Darren O'Brien, P.Geo., an independent consultant and qualified person as defined in National Instrument 43-101. Mr. O'Brien has reviewed and approved this news release. 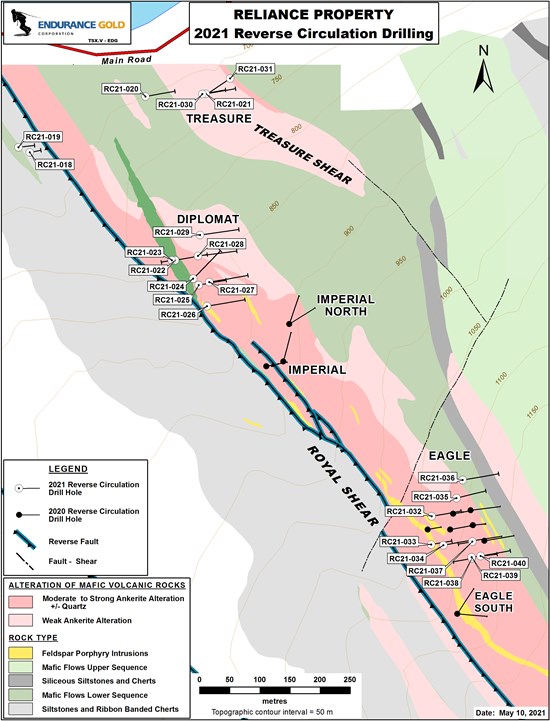 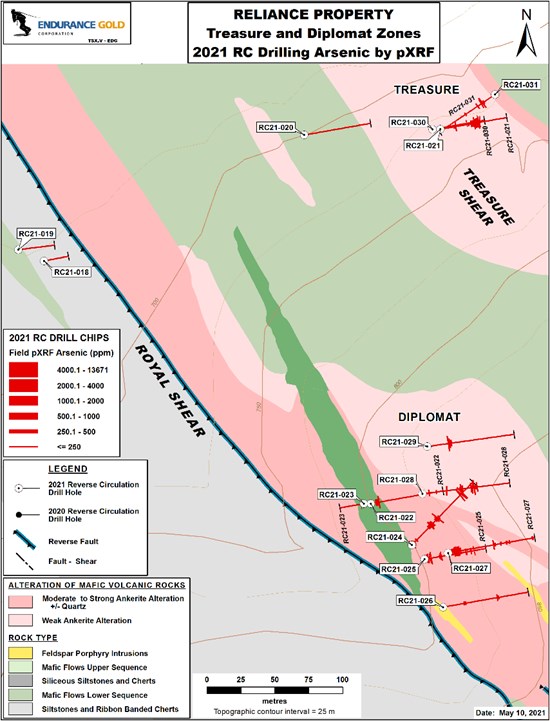 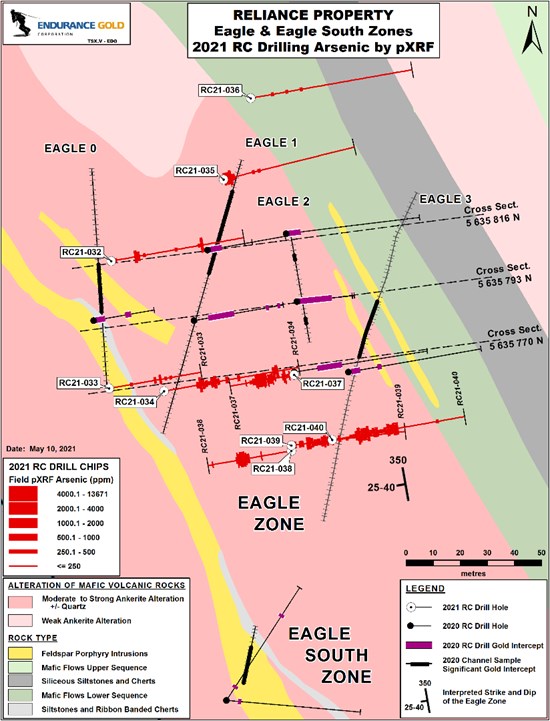 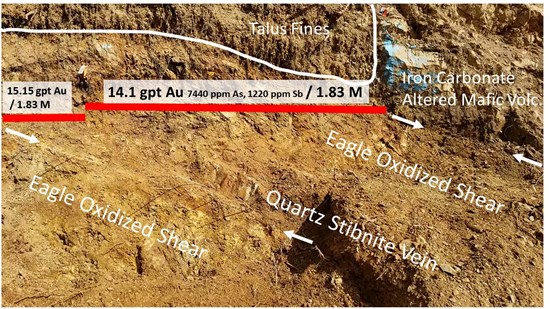 To view the source version of this press release, please visit https://www.newsfilecorp.com/release/83460