The 2021 phase 2 exploration campaign is designed to expand the NI 43-101 Kate Silver Resource (KSR) done by Dr. Gilles Arseneau in 2018. This will be done by further defining the limits of the Kate East zone, a zone that has the potential of raising the grade of the deposit. Viscount is also expanding the drilling to increase the tonnage that can be included in upcoming resource reports. Also, additional drilling will be conducted in the Passiflora target to continue to explore the potential to add to the total resource of the Silver Cliff project 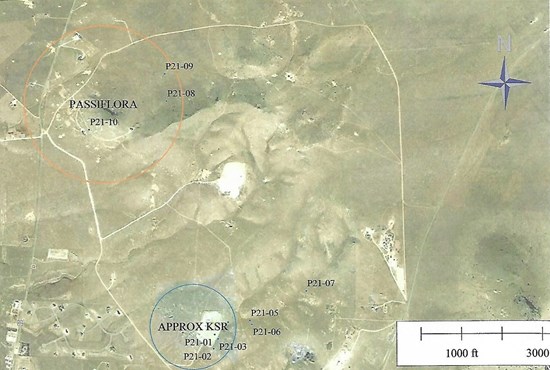 Four drill holes are planned to further define the Kate East zone. To date, all holes drilled by Viscount has intercepted significant silver grades (see table below). If this continues, it will potentially improve the grade of the resource as defined by Dr. Gilles Arseneau in his 2018 NI 43-101 report.

Three drill holes are planned to be drilled to the east of DDH-20-10. Two are to the south-east of DDH-20-10. Some historic drill results showed promise in this direction. The third is located about 485 m to the east, and additional historic drill holes show promise in this area. If the drill hole indicates additional mineralization. Subsequent holes will be drilled in phase 3 between this hole and DDH-20-10, and as defined by the geophysical and geochemical surveys. 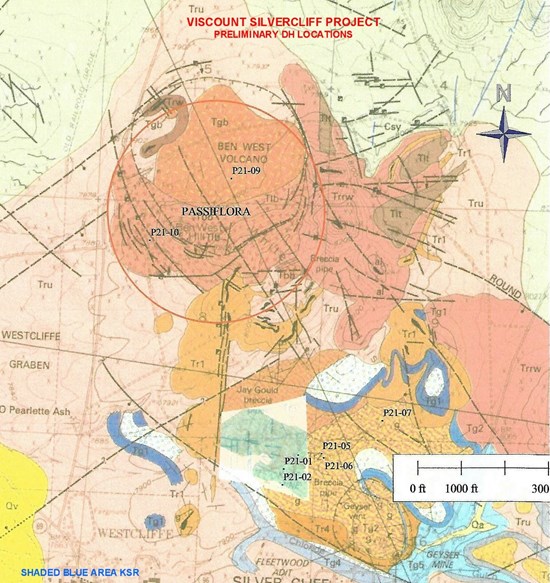 The maps above shows two different views of Viscount's two primary working targets and planned drill hole locations in phase 2. The first map is an aerial photograph showing the KSR general location and the Passiflora target. The second map shows structure in the Silver Cliff caldera. Note the abundance of curved faults that are so typical in calderas.

Viscount is also planning to drill three additional holes in the Passiflora target. Historic drilling has showed significant silver and gold intercepts. An internal report from CoCa Mines in 1983, estimated a potential resource of 40 million short tons, based on 14 drill holes (not NI 43-101 compliant), with the best intercept reporting to be 256 g/t silver and 1.4 g/t gold. Viscount drilled one hole in the Passiflora in 2020 to a depth of 193.9 m that showed anomalous silver throughout, some anomalous gold as well as strong silica and clay alteration and pyritization over most of the hole.

Viscounts 2016 and 2017 drill campaigns was to confirm historic drilling in the KSR. This was necessary, since the core and RC chips from all the previous drilling, including Tenneco's, have been lost, and only incomplete assay results, reports and summaries are known. Based on the data collected by Viscount, and the selected historic drilling data, Dr. Gilles Arseneau estimated that the Kate deposit contains 2,064,000 tonnes of indicated reserves averaging 84 g/t silver, and an inferred resource of 7,143,900 tonnes averaging 70 g/t of silver, using a 35 g/t cut-off. The report titled Mineral Resource Estimate for the Silver Cliff Property, Custer County, Colorado, USA dated April 15, 2018 was prepared by Dr. Gilles Arseneau, Ph.D., P. Geo of Arseneau Consulting Services ("ACS") in accordance with the Canadian Institute of Mining, Metallurgy and Petroleum ("CIM") Definition Standards incorporated by reference in National Instrument 43-101 ("NI 43-101") for its Silver Cliff property in Colorado.

The Phase 2 programs, both the geochemical and geophysical surveys and drilling, are aimed at defining additional silver resources to the East of the existing KSR. We are also planning the additional drilling at the Passiflora Target, to start investigating the veracity of previous estimates. Phase 3 will be focusing on the discoveries of phase 2, and also looking towards expanding the Kate Silver Resource to the North.

Mark Abrams, VP of Exploration, commented: "As Viscount continues its drill program defining additional silver targets at the Kate deposit, this will offer the potential for increasing the historic silver resource potentially mineable by open pit. The high silver values from our last drill campaign and the most recent results continues toward addressing our primary goal which is to expand our current resource by extending the drill program outside the perimeter of the area encompassed by the Tenneco PEA. We look forward to reporting further assays from this program as they become available."

The Company also wishes to announce that pursuant to the Company's Stock Option Plan it has granted 700,000 stock options at a price of $0.375 per common share to certain advisors and consultants of the Company. As per the Company's Stock Option Plan, the options granted are exercisable until March 26, 2026. The Options and underlying common shares are subject to a four-month hold period in accordance with the policies of the TSX Venture Exchange. Grant of the options is subject to the approval of the TSX Venture Exchange.

The Silver Cliff property in Colorado lies within the historic Hardscrabble Silver District in the Wet Mountain Valley, Custer County, south-central Colorado. It is located 44 miles WSW of Pueblo, Colorado, and has year-around access by paved road. The property consists of 2,319.48 hectares where high-grade silver, gold and base metal production came from numerous mines during the period 1878 to the early 1900's. The property underwent substantial exploration between 1967 and 1984.

To view the source version of this press release, please visit https://www.newsfilecorp.com/release/78838