Vancouver, British Columbia--(Newsfile Corp. - February 16, 2021) - Forum Energy Metals Corp. (TSXV: FMC) ("Forum" or "Company") is pleased to announce that Rio Tinto Exploration Canada (RTEC) has commenced drilling on Forum's 100% owned Janice Lake copper/silver project in Saskatchewan. Two drill rigs are initially testing the Rafuse target, a 2.8 kilometre long priority target of surface copper mineralization that was developed during RTEC's mapping, prospecting and geophysical program this past summer. It is clear that past historical drilling did not go deep enough nor far enough along strike to evaluate the possibility of multiple layers of shallow copper mineralization amenable to open pit mining.

Drilling of nine holes at Rafuse in 1969 to a maximum depth of 62 metres returned up to 17 metres of 0.68% copper and two holes drilled in 1993 by Noranda to a maximum depth of 128 metres returned 21.7 metres of 0.19% copper (see Figure 1 and news release dated November 11, 2020). Two, one-kilometre lines of an Induced Polarization (IP) survey conducted by RTEC over the Rafuse target this summer identified a strong chargeability anomaly starting at a depth of 130 metres. The first two holes are planned to test this IP chargeability anomaly.

The 110km winter haul road to the 80 person on-site drill camp has enabled delivery of the remaining required camp equipment and initial delivery of fuel on the 52km long Janice Lake copper/silver property. Rio Tinto plans to focus initial drilling at the Rafuse target area, followed by potential drilling at the Jansem, Juno and Roberts showing areas that are easily accessible during the winter months (Figure 2). Drilling at Jansem would follow up on thick intervals of surface copper mineralization outlined by drilling in 2019 (up to 51.8 meters grading 0.57% copper). Drilling at Juno and Roberts are follow-up targets from positive rotary air blast (RAB) drill results encountered during the past summer RAB drill program (up to 1.5m of 0.62% copper and 9.3 g/t silver at Juno). For further details, see news releases dated December 3, 2019, November 11, 2020 and November 18, 2020.

Forum Energy Metals Corp. (TSXV: FMC) has three 100% owned energy metal projects to be drilled in 2021 by the Company and its major mining company partners Rio Tinto and Orano for copper/silver, uranium and nickel/platinum/palladium in Saskatchewan, Canada's Number One Rated mining province for exploration and development. In addition, Forum has a portfolio of seven drill ready uranium projects and a strategic land position in the Idaho Cobalt Belt. For further information: www.forumenergymetals.com 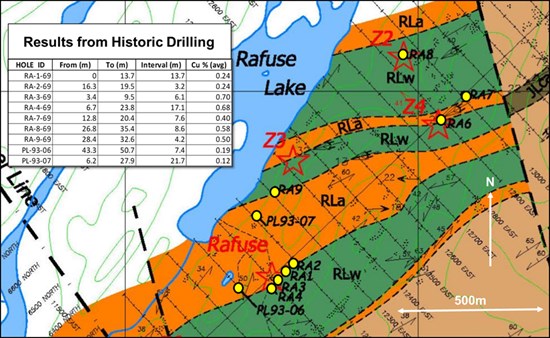 Figure 1: Geology and Historical DDH Locations on the Rafuse Target. The two IP lines are shown in yellow, the first two drill holes for 2021 are shown as purple dots with arrows. 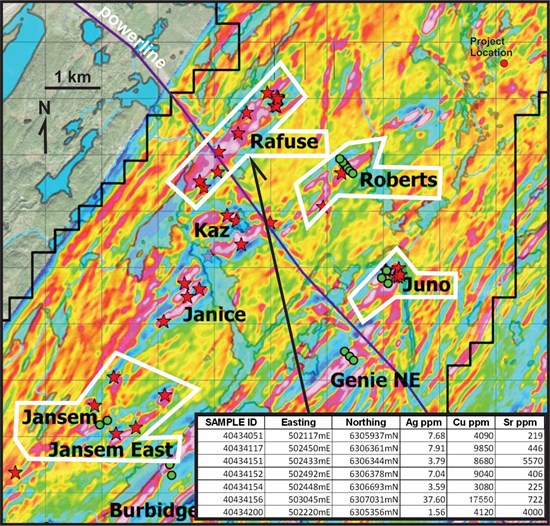 Figure 2: Four Drill Target Areas for 2021. Background is the airborne magnetic map of the area. RTEC surface sample results from the summer program range from 0.3% Cu to 1.75% Cu.

To view the source version of this press release, please visit https://www.newsfilecorp.com/release/74567