"As hoped, our recent CSAMT results have provided a detailed picture of the underlying structural architecture of the Tuvatu alkaline gold system," commented Dr. Quinton Hennigh, technical advisor to Lion One. "We can readily see evidence of structures we think were critical conduits for gold-bearing fluids during time of mineralization. This has generated a multitude of new drill targets. In the vicinity of the Tuvatu deposit, we can discern structures that will allow us to better plan holes in search of feeders at depth, we readily see new structural zones that have yet to be drill tested, we see structural intersections that may have served to localized mineralization, and importantly, we see many new untested structures elsewhere within the Navilawa caldera. In short, we now have a long list of new structural drill targets that we think have the potential for hosting significant gold-bearing lode deposits."

CSAMT is a geophysical technique that measures electrical resistivity of rocks in the subsurface down to depths of approximately 1.2 to 1.5 km. Fluids that generate alkaline gold systems such as Tuvatu result in subtle wall-rock alteration patterns commonly restricted to the immediate vicinity around mineralized structures. Therefore, such alteration is too restricted to be directly reflected in CSAMT data. CSAMT data generally highlight contrasting bedrock types. Abrupt changes in resistivity, or gradients, result when two rock types with differing electrical resistivity are juxtaposed against one another, either by faulting or, as is true at Tuvatu, by intrusion of magma into other pre-existing rock types. Resistivity gradients may also reflect areas where abundant fractures have allowed groundwater to penetrate resistive rocks generating areas of lower resistivity.

When interpreting CSAMT data from alkaline gold systems, resistivity gradients are the main focus. It is generally viewed that such gradients reflect zones where faults and fractures may be present, ones that potentially host mineralization. 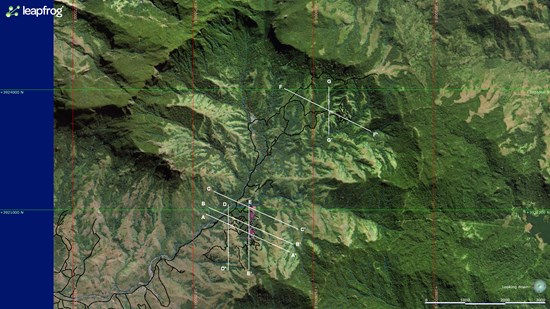 Figure 1: Plan map showing the Navilawa caldera and the positions of interpreted CSAMT sections discussed in this news release. Scale in the lower right is in meters. 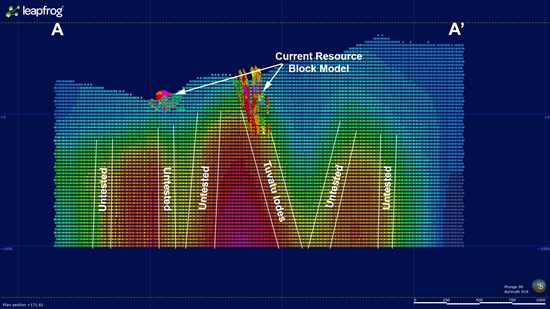 Figure 2: Interpreted CSAMT section A-A'. See Figure 1 for location and text in this news release for a discussion. Scale in the lower right is in meters. 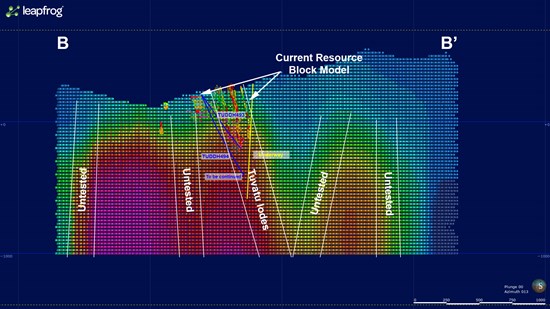 Figure 3: Interpreted CSAMT section B-B'. See Figure 1 for location and text in this news release for a discussion. Scale in the lower right is in meters.

Section B-B' (please refer to Figure 3): As in section A-A' approximately 150 m to the south, the deep-rooted, steeply E-dipping structural corridor that hosts the N-S-trending Tuvatu lode system is readily evident in Section B-B' appearing as a sharp resistivity gradient extending beyond 1 km below surface. Recent diamond drill holes, TUDDH493 and TUDDH494 are illustrated in blue. Hole TUDDH493 encountered multiple mineralized intervals including 4.29 m grading 33.22 gpt Au (please refer to the Company's press release dated December 18, 2019 for additional information) within the Tuvatu lode system. Drilling of hole TUDDH494 has been put on hold at a depth of approximately 748 m due to the capacity of the diamond drill to continue drilling HQ-sized core beyond this depth. Lion One has ordered 1,500 m of smaller NQ-sized drill rods and plans to complete this hole to target in the future. In the meantime, the next deep hole, seen in yellow, has recently been initiated. As is the case in Section A-A', Lion One believes there is potential the Tuvatu lode gradient may also point to a deep-tapping feeder structure that funneled gold-depositing fluids upwards into the Tuvatu lode system, a high-value target. Four other deep-rooted resistivity gradients, two west of the Tuvatu lode system and two east, are readily evident, and each is considered a new, highly prospective drill target. The gradient immediately west of the Tuvatu lode system may host a feeder structure for the West Tuvatu lode system. 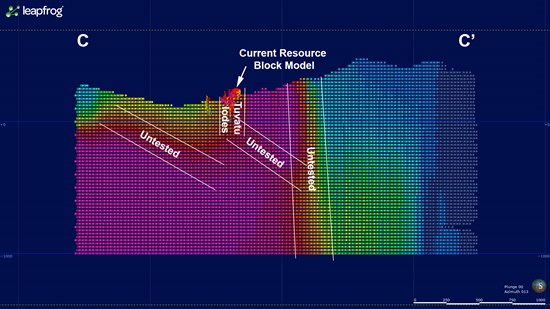 Figure 4: Interpreted CSAMT section C-C'. See Figure 1 for location and text in this news release for a discussion. Scale in the lower right is in meters. 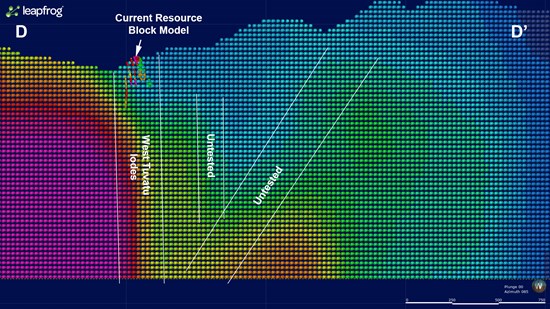 Figure 5: Interpreted CSAMT section D-D'. See Figure 1 for location and text in this news release for a discussion. Scale in the lower right is in meters.

Section D-D' (please refer to Figure 5): A sharp, near-vertical gradient is readily evident below the West Tuvatu lode system. This represents an important, newly identified target at Tuvatu, the potential position of a root structure that fed the near-surface lodes. Two subtle gradients are evident south of this feature, the southern most of which nearly reaches surface in an area south of Tuvatu where Lion One has identified multiple gold-bearing surface showings. Lion One considers it possible that fluids ascended from a deep source linked to the larger West Tuvatu lode structure feeding gold to this area. 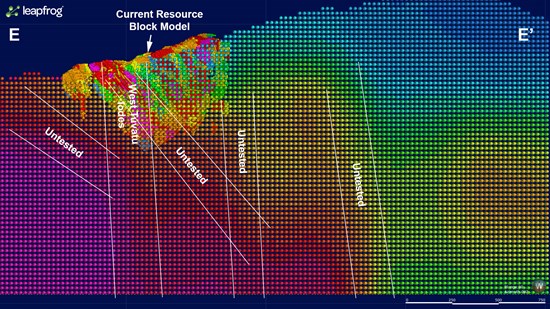 Figure 6: Interpreted CSAMT section E-E'. See Figure 1 for location and text in this news release for a discussion. Scale in the lower right is in meters. 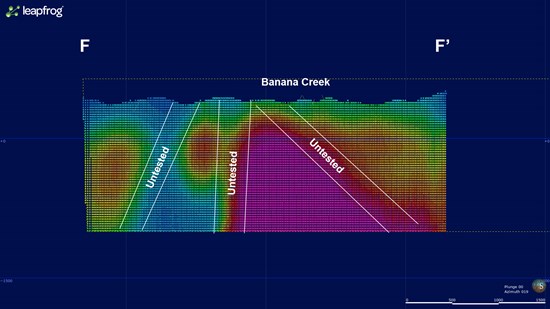 Figure 7: Interpreted CSAMT section F-F'. See Figure 1 for location and text in this news release for a discussion. Scale in the lower right is in meters.

Section F-F' (please refer to Figure 7): Two pronounced resistivity gradients are evident under the Banana Creek area where recent stream sediment samples returned strongly anomalous gold values (please refer to the Company's press release dated November 7, 2019 for additional information), one dipping steeply to the west and the other dipping moderately to the east. Lion One views these structures as highly prospective drill targets. A more subtle W-dipping gradient is evident near the west end of the section. 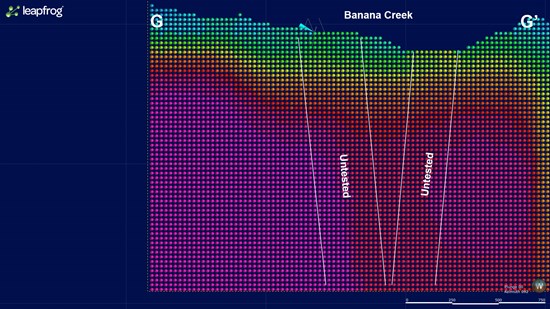 Figure 8: Interpreted CSAMT section G-G'. See Figure 1 for location and text in this news release for a discussion. Scale in the lower right is in meters.

Section G-G' (please refer to Figure 8): A pair of subtle steeply-dipping gradients are evident in section G-G', and probably share a conjugate relation with structures seen in Section F-F'. Such structures are viewed as possible feeder structures that tapped deeply sourced gold-bearing fluids that gave rise to lodes within the Navilawa caldera.

CSAMT surveys at Tuvatu were undertaken by Zonge Engineering and Research Organization (Aust) Pty. Ltd., Adelaide, Australia under the supervision of Tom Weis, professional geophysicist, contracted by the Company.

The scientific and technical content of this news release has been reviewed, prepared, and approved by Mr. Stephen Mann, P. Geo, Managing Director of Lion One, who is a qualified person pursuant to National Instrument 43-101 - Standards of disclosure for Mineral Projects ("NI-43-101).

The Tuvatu gold deposit is located in on the island of Viti Levu in the South Pacific island nation of Fiji. The mineral resource for Tuvatu as disclosed in the technical report "Tuvatu Gold Project PEA", dated June 1, 2015, and prepared by Mining Associates Pty Ltd of Brisbane Qld, comprises 1,120,000 tonnes indicated at 8.17 g/t Au (294,000 oz. Au) and 1,300,000 tonnes inferred at 10.60 g/t Au (445,000 oz. Au) at a cut-off grade of 3 g/t Au. The technical report is available on the Lion One website at www.liononemetals.com and on the SEDAR website at www.sedar.com.

About Lion One Metals Limited

Lion One's flagship asset is 100% owned, fully permitted high grade Tuvatu Alkaline Gold Project, located on the island of Viti Levu in Fiji. Lion One envisions a low-cost high-grade underground gold mining operation at Tuvatu coupled with exciting exploration upside inside its tenements covering the entire Navilawa Caldera, an underexplored yet highly prospective 7km diameter alkaline gold system. Lion One's CEO Walter Berukoff leads an experienced team of explorers and mine builders and has owned or operated over 20 mines in 7 countries. As the founder and former CEO of Miramar Mines, Northern Orion, and La Mancha Resources, Walter is credited with building over $3 billion of value for shareholders.

Neither the TSX Venture Exchange nor its Regulation Service Provider accepts responsibility for the adequacy or accuracy of this release.

To view the source version of this press release, please visit https://www.newsfilecorp.com/release/52112

Sign up to receive news releases by email for Lion One Metals Limited or all companies belonging to the Mining/Metals, Precious Metals industries.