* All intervals reported are downhole core lengths. Accurate true widths are unknown at this time but are estimated to be within 70-100% of the reported intervals based on the geometry of the bodies and structural measurements on oriented core.

Phase 2 Drilling
Twenty of the twenty-six holes drilled during Phase 2 of the 2022 drilling campaign were cored in Zone 1 and tested the up-dip and eastern extent of Pegmatites 1 and 3. Zone 1 is a stacked set of shallow dipping pegmatite dykes that make up the main target of the first stages of exploration of the Raleigh Lake project.

Zone 1 pegmatites have been defined by drilling and surface exposures in an area exceeding 600 metres x 400 metres for Pegmatite 1. The Phase 2 drill holes were drilled interstitially to historic drill holes and the Company's previous drilling (Figure 1). Pierce points were planned to be at approximately 50 metre step outs from one another in preparation for a maiden resource calculation and to better define the core zone of Pegmatite 1 and its associated rubidium rich component.

The high-grade core of Pegmatite 1 is trending up-dip towards the surface exposure (Figure 1 and 2). This trend provides an additional 250 metres of up-dip extension for the high-grade core from the current drilling, bringing a good portion of the target closer to surface. Additionally, there are several smaller spodumene bearing pegmatites intersected at deeper depths below Pegmatite 1 which the Company interprets as providing significant discovery potential below and to the north of the current target area.

Six holes from Phase 2 were cored into Zone 2 targeting structures interpreted from airborne magnetic data and supported by lithogeochemical surveys showing elevated lithium concentrations. The down dip projection of Pegmatite 2, a small surface exposure of spodumene-bearing pegmatite approximately 750 metres northwest of Pegmatite 1 with a similar structural orientation, was also tested during this program but access to suitable drill sites was restricted due to topographical and terrain constraints. Results were encouraging with some spodumene bearing pegmatitic veins being intersected but more importantly the continuity of the Zone 2 pegmatites, which dip consistently to the southeast, project below Pegmatites 1 and 3 at Zone 1. The down dip potential of these spodumene-bearing dykes will be further investigated in future drill programs.

A summary of the analytical results for Phase 2 is given in Table 2.

Phase 3 Drilling
The Company is now preparing for the third phase of drilling in 2022 where an additional 1,500 metres of drilling will test portions of the up-dip component to Pegmatite 1 and approximately 1,000 metres testing a number of shallow targets identified in Zones 5 and 6 that are road accessible.

Table 1: Summary of drill holes cored during Phase 2 of the 2022 drill program at Raleigh Lake.

** All intervals reported in this table are downhole core lengths. Accurate true widths are unknown at this time but are estimated to be within 70-100% of the reported intervals based on the geometry of the bodies and structural measurements on oriented core. 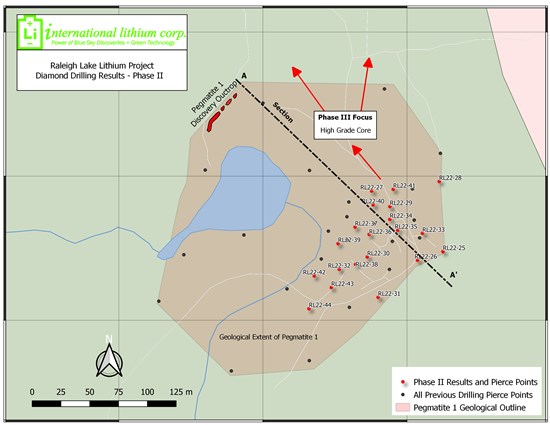 Figure 1: Approximate surface trace outline of Pegmatite 1 showing pierce points from drilling. Pegmatite 1 appears to have an enriched core trending up dip toward the northwest. The Company will investigate this enrichment trend in upcoming drill programs.

Figure 2: Cartoon cross section A-A' (Figure 1) illustrating the orientation of Pegmatite 1 and the up-dip projection to its surface outcrop. Pegmatite 1 appears to have an enriched core, a rubidium rich zone in the form of a monomineralic microcline and is thicker than previously interpreted based on the exposed outcrop, which occurs in a heavily vegetated area. Note that smaller pegmatitic veins intersected in the drill holes are not shown.

These are very good results with high grades of lithium and rubidium at Raleigh Lake, and we are increasingly enthusiastic about the prospects for this project. Now that we have our permissions in place for further drilling, we will shortly begin some of the additional drilling that we have been planning.

We should be on track to produce a Maiden Resource Estimate for Raleigh Lake by the end of 2022.

It should be stressed that the above results represent drilling on only about 8% of our 48,500 hectares for this project.

Primary analysis method: Peroxide (Total) Fusion, ICP-OES & ICP-MS with 55 elements that include detection levels for Li of 15ppm - 50,000ppm and rubidium of 0.4 to 5,000 ppm (Lab code UT7). Sodium peroxide fusion provides total metal recovery and is effective for the decomposition of sulphides and refractory minerals which are common to pegmatite.

Over limit analysis method: Samples that return with results above the instruments detectable levels for lithium (50,000 ppm) and Rb (5,000 ppm) are then re-analyzed by Assay Grade, Peroxide (Total) Fusion (Code 8 Peroxide ICP-OES).

The drill program was under the control of a Professional Geoscientist, registered with Engineers & Geoscientists British Columbia. The Company and its contractors carried out the program under full compliance with COVID-19 protocols based on guidelines issued by Public Health Ontario and provincial health authorities of Ontario to ensure the safety and health, for all personnel.

International Lithium Corp. believes that the world faces a significant turning point in the energy market's dependence on oil and gas and in the governmental and public view of climate change. In addition, we have seen the clear and increasingly urgent wish by the USA and Canada to safeguard their supplies of critical battery metals and to become more self-sufficient. Our Canadian projects are strategic in that respect.

Our key mission in the next decade is to make money for our shareholders from lithium and rare metals while at the same time helping to create a greener, cleaner planet. This includes optimizing the value of our existing projects in Canada and Ireland as well as finding, exploring and developing projects that have the potential to become world class lithium and rare metal deposits.

A key goal has been to become a well-funded company to turn our aspirations into reality, and following the disposal of the Mariana project in Argentina in 2021 and the Mavis Lake project in Canada in January 2022, the Board of the Company considers that ILC is now well placed in that respect with a strong net cash position.

The Company's interests in various projects now consists of the following, and in addition the Company continues to seek other opportunities:

The Company's primary strategic focus at this point is on the Raleigh Lake lithium, rubidium and caesium project in Canada and on identifying additional properties.

The Raleigh Lake project consists of 48,500 hectares (485 square kilometres) of mineral claims in Ontario and is ILC's most significant project in Canada. The exploration results there so far, which are on only about 8% of ILC's current claims, have shown significant quantities of rubidium and caesium in the pegmatite as well as lithium. Raleigh Lake is 100% owned by ILC, is not subject to any encumbrances, and is royalty free.

To view the source version of this press release, please visit https://www.newsfilecorp.com/release/137801