Helsinki, Finland--(Newsfile Corp. - March 29, 2022) - Leading Play-To-Earn (P2E) title, Galaxy Blitz, has this week concluded a widely successful IDO, selling out native $MIT tokens across multiple platforms consecutively to value the project at $100 million. Galaxy Blitz is an action-packed sci-fi combat strategy NFT-based game set to be one of the first games in the blockchain space to use AR components in real gameplay for unprecedented levels of fun and true immersion. 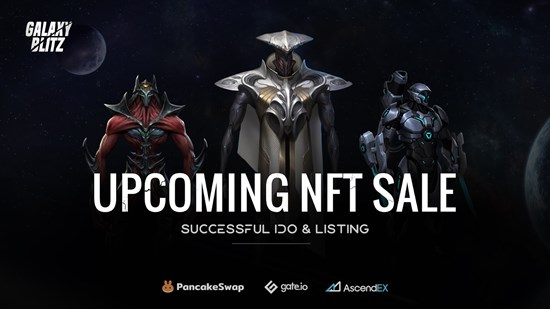 In the interest of fairness to all community members, the highly anticipated Galaxy Blitz IDO was spaced out across 7 different platforms over the course of a week from March 17th - 22nd. On the 23rd, leading cryptocurrency exchange, Gate.io, held a community event for $MIT to kick-start listing, which drew record numbers of investors and concluded the sell-out IDO. Investors lucky enough to pick up some $MIT through the Gate.io listing promotion made over 350% on their initial investment as the token price of $MIT jumped from the initial $1 to $3.50 upon listing. For community members looking to be a part of the Galaxy Blitz ecosystem, $MIT tracking is now live on CoinGecko and CoinMarketCap, and trading on Gate.io, PancakeSwap, or AscendEX.

Galaxy Blitz $MIT is valued by its broad utility and earning potential. $MIT will be used within the Galaxy Blitz ecosystem as the primary global currency, for processing in-game transactions, and as a key marketing tool to bring in new players. Players can choose to stake their $MIT to progress within the game, expand their empires, and gain tangible rewards. Staking $MIT helps increase a player's in-game power in a number of ways, including decreasing spaceship flight time, increasing immunity periods, and increasing the success probability of NFT minting and forging. As a reflection of this value and utility, since listing, the $MIT token price has not dropped below IDO levels, and the project's official social media accounts have seen a surge of new followers.

Following the IDO, CEO Gavin said, "It's fantastic to see that people are just as excited about Galaxy Blitz as we are. I believe people are starting to become aware that Galaxy Blitz is set to be an other-worldly experience that will both bolster this community and serve as an unprecedented investment opportunity for early investors who could even see $MIT 100x. Not only $MIT, but the NFTs that are soon to be dropping in the coming weeks are also going to change the way this industry, and in fact, the entire gaming industry sees value-add and innovation."

The Galaxy Blitz team is committed to delivering a P2E game worthy of the quality AAA title. This means that aside from just flashy graphics and innovative token rewards mechanisms, it must offer players a new experience that drives adoption to new people and new markets. Players will be able to test out this new experience in April when Galaxy Blitz launches the official beta testing period and then later with the incoming V1 and V2 PC demos.

Hailed as an innovation for the industry, Galaxy Blitz will be utilizing NFTs to bridge the gap between online and offline, presenting beautifully crafted AR renderings that will give a completely immersive experience to the game. NFTs will also be used as in-game characters and items, meaning each NFT has its own unique stats and usability, as well as being able to stake and earn up to 600% APY rewards.

Galaxy Blitz NFTs are still yet to be fully unveiled, but throughout April, players will be able to mint or purchase NFT packs of 2 differing rarities ranging from $99.9 - $299.9. NFT packs will be available on leading centralized exchanges, high-quality NFT launchpads, reputable marketplaces such as Opensea and Rarible, and via the official Galaxy Blitz DAO-operated website. In the interest of fairness, the team has modified pack rarity ratios and now allows the merging of two lower-ranked packs into one higher-rank pack.

Galaxy Blitz is a Play-To-Earn combat strategy NFT game set centuries in the future as four unique highly evolved descendants of humanity fight for dominance in battles on both lands and in space. Earn a variety of tokens via battles and resource farming as you lead your faction to galactic dominance!

To view the source version of this press release, please visit https://www.newsfilecorp.com/release/118530