Toronto, Ontario--(Newsfile Corp. - December 2, 2021) - Generic Gold Corp. (CSE: GGC) (FSE: 1WD) (OTCQB: GGCPF) ("Generic Gold" or "Generic" or the "Company") is pleased to announce that it has begun drilling its Phase 2 diamond program on its Belvais project, located in the northwestern region of Quebec's Abitibi greenstone belt. Approximately 4,500 m are scheduled to be drilled across numerous newly identified targets as previously mentioned in the Company's October 28 release.

These targets include (but are not limited to):

As a reminder, Generic Gold holds up to 18km of the favourable Normétal Mine Sequence, of which kilometric sections have never been drill tested. The Company will begin drilling at the 'splay fault target,' lying along the Mine Sequence (see Figure 2 below) which Generic believes holds the potential to host both of either gold or VMS mineralisation. Nearby historical drilling (from the 1950s) states favourable characteristics in drill logs, such as quartz veins up to 6 ft that were never previously assayed.

Aaron Stone, Vice President Exploration of Generic Gold, stated, "We are excited to recommence drilling at Belvais. One of the main focuses of this phase of drilling will be along the Normétal Mine Horizon, where Starr Peak Mining and Amex Exploration have made recent high-grade VMS discoveries. Generic holds a significant portion of this geological sequence, of which many large sections still remain untested. In addition, much of the historical drilling was extremely shallow and barely scratched the surface. We believe these drill holes hold enormous potential as do our other targets across the property."

As shown in Figure 1, the Belvais project lies directly south-east of Amex Exploration's Perron Project, which recently announced a new VMS discovery (the QF Zone) along the Normétal Mine Sequence (see Amex Press Release dated August 9, 2021), and is also directly east and south-east of Starr Peak's NewMétal Project, which announced high-grade VMS mineralization on their Normetmar target (see Starr Peak Press Release dated May 4, 2021). Both of these new discoveries occur along the Normétal Fault which is of particular significance for Generic Gold, as the Company holds over 20 km of the Normétal Fault on its Belvais claims and is one of the largest landholders in the area with 12,563 hectares. 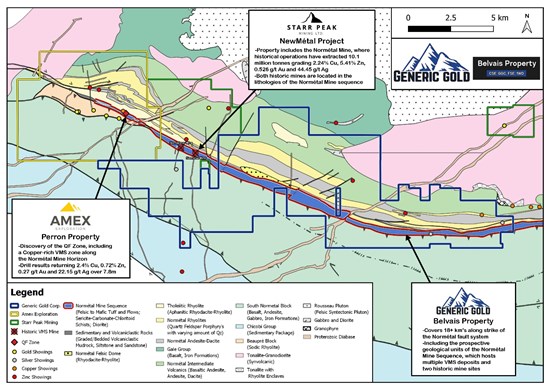 Figure 1: Generic Gold's Belvais project with respect to Amex Exploration's Perron project and Starr Peak's NewMétal project, noting the highlighted Normétal Mine Horizon sequence (shown in blue) of which Generic holds up to 18km of. 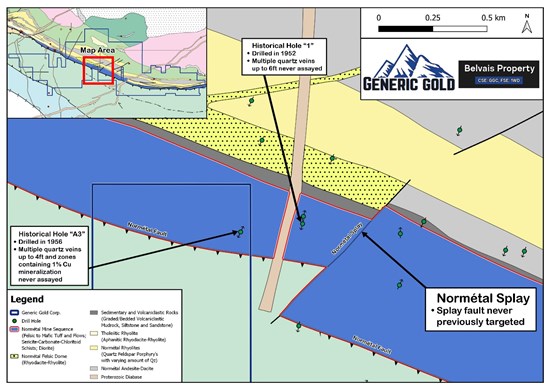 Figure 2: The Normétal Splay Fault, which has never been previously drill tested, has been identified as a target for the upcoming Phase 2 drill program. Surrounding historical drilling contained significant quartz veining and mineralisation that were never assayed. *Historical Hole A3 not located on Generic property. **Taken from historical log of hole A3 - "1% copper (visual estimate)" at 596ft.

Generic Gold is a Canadian mineral exploration company focused on gold projects in the Tintina Gold Belt in the Yukon Territory of Canada and the Abitibi Greenstone Belt in Quebec, Canada. The Company's Quebec exploration portfolio consists of four properties covering 12,563 hectares proximal to the town of Normétal, and east of Amex Exploration's Perron project and the past-producing Normétal mine. The Company's Yukon exploration portfolio consists of several projects with a total land position of greater than 35,000 hectares, all of which are 100% owned by Generic Gold. Several of these projects are in close proximity to significant gold deposits, including Goldcorp's Coffee project, Victoria Gold's Eagle Gold project, White Gold's Golden Saddle project, and Western Copper & Gold's Casino project. Generic Gold's board of directors and management team is led by experienced mining industry professionals, with expertise in exploration, finance, capital markets, and mine development. For information on the Company's property portfolio, visit the Company's website at www.genericgold.ca.

To view the source version of this press release, please visit https://www.newsfilecorp.com/release/106323