Based on these positive results, the joint venture partner JOGMEC is presently working with Thunderstruck on details of an aggressive 2020 drill program.

Bryce Bradley, Thunderstruck's President/CEO, stated, "Thunderstruck is pleased with the initial drill results at Korokayiu which have confirmed the presence of high grade copper-zinc massive sulphide mineralization. With the last drilling on this prospect occurring over 40 years ago, and with no historic drill core remaining, we knew our first task would be to verify some of the key historically reported drill intercepts and provide new drill core to bring the significance of the Korokayiu discovery to light. We look forward to receiving additional drill results in the coming weeks that include further drilling on this section and step-outs to the east."

The 2019 Korokayiu Joint Venture (JV) zinc-copper volcanogenic massive sulphide (VMS) prospect diamond drill program comprised 7 drill holes totaling 904 metres designed to verify the presence of historically reported copper-zinc massive mineralization and further test the extent of the deposit area. The 2019 diamond drill program has now paused for the holiday break and is expected to resume in early January, 2020. The drilling is funded by Japan Oil Gas and Metals National Corporation (JOGMEC), a Japanese company funded by the national government with the intent of discovering large-scale mineral deposits that will benefit Japanese industry.

"JOGMEC is currently in Fiji with Thunderstruck planning our 2020 drill program with a minimum expenditure of $1,500,000 to further test the depth and size of Korokayiu," Bradley added. "Positive results may accelerate the program and increase expenditures." 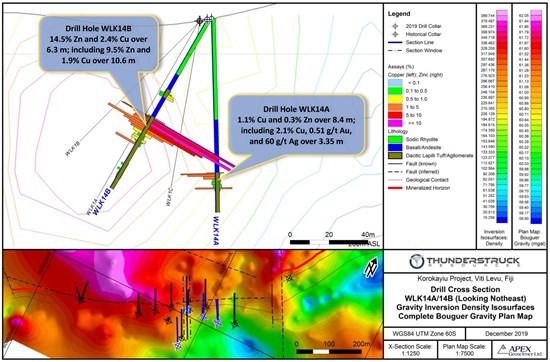 Viti Levu, the main island of Fiji, has a long mining history. It is on the prolific Pacific Ring of Fire, a trend that has produced numerous large deposits, including Porgera, Lihir and Grasberg. The island of Viti Levu hosts Namosi, held by a joint venture between Newcrest and Mitsubishi. Newcrest published Proven and Probable Reserves for Namosi of 1.3 billion tonnes at 0.37% Cu and 0.12 g/t Au (5.2M ounces Au and 4.9M tonnes Cu). Namosi is now undergoing environmental assessment as part of the permitting process. Lion One Metals is now developing its Tuvatu Project, with Indicated Resources of 1.1 million tonnes at 8.17 g/t Au (294,000 ounces Au), and Inferred Resources of 1.3 million tonnes at 10.6 g/t Au (445,000 ounces Au). The Vatukoula Gold Mine has been operating for 80 years, producing in excess of 7 million ounces.

Thunderstruck Resources is a Canadian mineral exploration company that has assembled extensive and highly prospective properties in Fiji on which recent and previous exploration has confirmed zinc, copper and precious metals mineralization. The Company provides investors with exposure to a diverse portfolio of exploration stage projects with potential for zinc, copper, gold and silver in a politically safe and stable jurisdiction. Thunderstruck trades on the Toronto Venture Exchange (TSX-V) under the symbol "AWE" and United States OTC under the symbol "THURF."

The analytical work reported on herein was performed by Australian Laboratory Services Pty. Ltd. (ALS) at Perth, WA. ALS is an ISO-IEC 17025:2017 and ISO 9001:2015 accredited geoanalytical laboratory and is independent of the Thunderstruck Resources and the QP. Drill core samples were subject to crushing at a minimum of 70% passing 2 mm, followed by pulverizing of a 250 gram split to 85% passing 75 microns (PREP-31). A 0.25 gram sample pulp was then subject to 4-acid (HF-HNO3-HClO4) digestion and analysis via 33 element ICP-AES analysis (ME-ICP61) for base metals and silver, and 30 gram fire assay fusion (Au-AA25) for gold determination. Base metal over limit values returning greater than 1%, or greater than 100 g/t for silver, were analyzed by four-acid digestion of a 0.40 gram sample pulp, followed analysis via ICP-AES (ME-OG62).

Kristopher J. Raffle, P.Geo. (BC) Principal and Consultant of APEX Geoscience Ltd. of Edmonton, AB, is a qualified person for the project as defined by National Instrument NI 43-101. Mr. Raffle has reviewed and approved the portion of the technical content of this news release as it relates to Korokayiu VMS prospect.

To view the source version of this press release, please visit https://www.newsfilecorp.com/release/50687