Edmonton, Alberta--(Newsfile Corp. - May 30, 2019) - Benchmark Metals Inc. (TSXV: BNCH) (OTCQB: CYRTF) (WKN: A2JM2X) (the "Company" or "Benchmark") - is pleased to report 752 hectares of new claims added to the Lawyers Gold & Silver Project, British Columbia, Canada. The new claims are contiguous to the southeast, increasing the Lawyers land package to 127 km2 within the northeastern region of the prolific metal-endowed Stikine Terrane (Figure 1). Magmatic events in Stikine during the Late Triassic and Early Jurassic are the driving source for the development of mineralizing porphyry and epithermal systems. On both the east and west sides of the Bowser Basin the same magmatic and mineralizing events are recognized (Logan and Mihalynuk, 2014), forming an arch of gold and polymetallic mineralization; which is depicted herein as the 'Golden Horseshoe' (Figure 1).

CEO John Williamson commented, "Benchmark has significantly increased its land position in 2019 with 100% ownership on the new claims in areas that hold large, anomalous geophysical targets over anomalous gold-silver geochemistry results. The 2019 drill program will focus on high-priority resource expansion targets, but also test never before drilled targets over the new claims."

The newly staked claim is underlain by a +3km coincident radiometric/magnetic anomaly as a continuation from the existing Lawyers land package. The regional magnetics show a northwest-southeast trending structure traversing the new claim which parallels other structures key to the distribution of mineralization in the existing mineral resource of the Lawyers Trend. Very limited historical rock and soil sampling in the new claim has provided anomalous gold, silver and copper values.

With this most recent staking Benchmark has added 28km2 of new ground to the Lawyers Project in 2019 (~30% increase) which includes anomalous gold, silver and copper values recorded from soils and rock samples. The new ground has also provided three large geophysical anomalies that are coincident with a number of anomalous historic rock and soil samples.

Benchmark retains 100% in the new claims that contain highly prospective host rocks and an important unconformity between the Stuhini Group and Hazelton Group volcanics. This stratigraphic horizon is an important marker with many of the deposits in the Golden Horseshoe concentrated along it, The Lawyers Project is located in the Stikine Terrane, where magmatic events provided a source for mineralizing porphyry and epithermal systems. These mineralizing events form an arch of gold and polymetallic deposits around the Bowser Basin (that include Brucejack, KSM, Premier, Red Mountain, Bronson, GT Gold, Red Chris, and Kemess), depicted as the 'Golden Horseshoe' of northern British Columbia, Canada. The horizon cuts through the new claims with more than half of the new ground covered by the Metsantan member of the Hazelton Group volcanics, which is host to most known mineralization along Lawyers Trend.

The Lawyers Trend is emerging as an important regional scale prospect that follows linear magnetic and radiometric anomalies with a northwest to southeast orientation connecting multiple gold-silver showings across the Lawyers land package. Several lines of evidence now support the potential that this anomaly may represent a regional scale structure providing a conduit for gold and silver bearing fluids.

Benchmark has acquired and is interpreting new historical data for the Lawyers property, new information and results will be forthcoming.

The Golden Horseshoe provides a visual context for the mines, discoveries and common geology of the Golden Triangle and Toodoggone regions, which forms a prolific metalliferous arch that includes the Quesnel and Stikine terranes. The location map illustrates 100% ownership of new claims over anomalous K-radiometric geophysics. 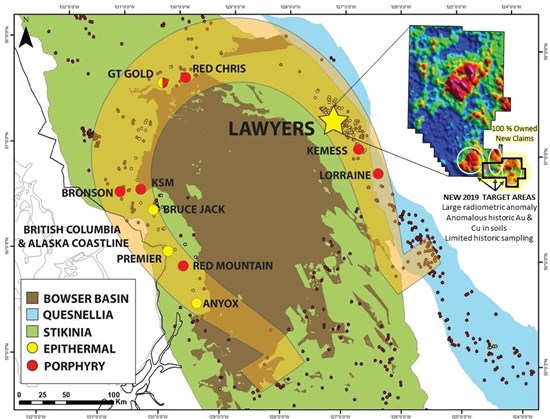 The technical content of this news release has been reviewed and approved by Michael Dufresne, M.Sc., P.Geol., P.Geo., a qualified person as defined by National Instrument 43-101.

Benchmark is a Canadian mineral exploration company with its common shares listed for trading on the TSX Venture Exchange in Canada, the OTCQB Venture Market in the United States and the Tradegate Exchange in Europe. Benchmark is managed by proven resource sector professionals, who have a track record of advancing exploration projects from grassroots scenarios through to production.

To view the source version of this press release, please visit https://www.newsfilecorp.com/release/45173

Sign up to receive news releases by email for Benchmark Metals Inc. or all companies belonging to the Mining/Metals industry.